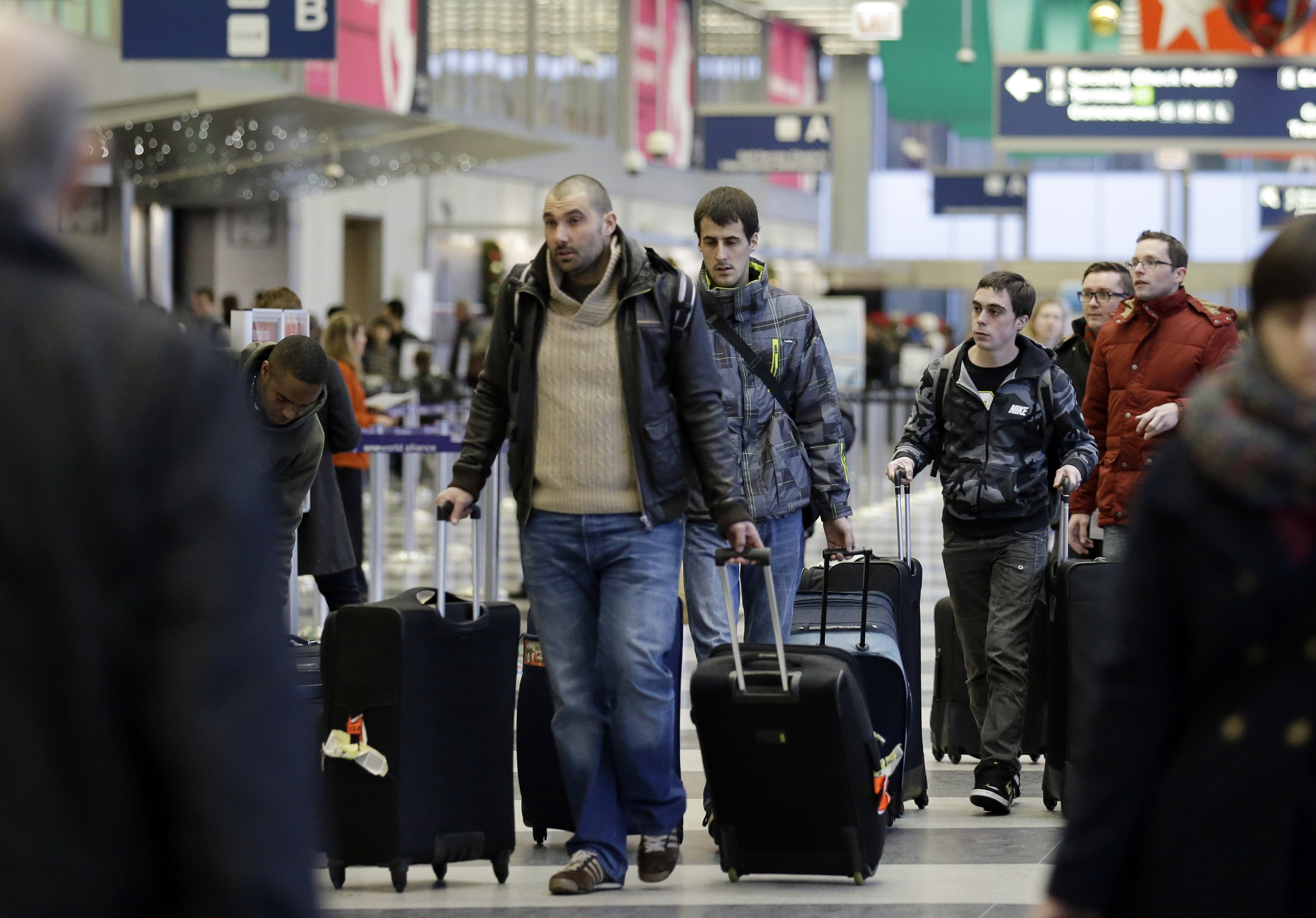 ST. LOUIS -- Holiday travelers in the Midwest and in parts East and South were keeping a leery eye Friday on a band of foul weather that stretched across the nation's midsection and that was threatening to mess up opening weekend of one of the year's busiest travel periods.

Forecasters were predicting a stew of foul weekend weather, from freezing rain then snow in the north to torrential rain in the Ohio Valley and Appalachia and possibly even tornadoes in parts of the South.

The worst of the storm wasn't expected to hit Midwest population centers until Saturday, but the weather was already taking a toll on air travel Friday: FlightStats.com reported more than 1,900 U.S. delays, with the most at Chicago's O'Hare, Denver International, and the three big New York-area airports.

"As we head towards this weekend, a two-sided storm with heavy rain, flood watches on the eastern flank, lots of winter storm and ice storm warnings on the western flank, and very cold air," said Eric Fisher, the chief meteorologist at the CBS Boston station, WBZ.

"So as we head towards the start of the weekend, Oklahoma City where icing has already begun all the way up towards Chicago, it's a mix of ice and snow, and a big severe weather threat where tornados and damaging winds are possible in the lower Mississippi Valley," Fisher said.

The foul weather could cause headaches for the estimated 94.5 million Americans planning to travel by road or air during this holiday season, which runs from Saturday through New Year's Day.  Concerns were similar to just a month ago, when a winter storm hit just as people were traveling for Thanksgiving.

Tom Griffith, a financial planner from suburban Little Rock, Ark., moved up his departure time for a two-day road trip to Cincinnati so he could get ahead of bad weather.

"The TV said severe weather would impact southeast Arkansas up to Memphis in the afternoon. My plan is to be past Memphis before noon," Griffith said Friday. "I guess my biggest concern would be the wind with the semis on the interstates."

Initial worries are mostly in the South and Midwest, with the East next in the storm front's crosshairs, creating pre-Christmas travel worries from Chicago and Detroit to Boston and New York.

The Wisconsin Department of Transportation said that Interstate 90/94 was ice-covered from Tomah and Mauston. The state was bracing for significant snow, sleet and ice.

The National Weather Service issued a flash flood watch from Arkansas northeastward through parts of Missouri, Illinois, Indiana and Ohio, with up to 4 inches of rain projected. With falling temperatures, some of that could be freezing rain by Saturday night in the St. Louis area, weather service meteorologist Jon Carney said.

Forecasters said thunderstorms would likely develop in the South. The area that was most in peril stretched from central and northeastern Texas through Louisiana, Mississippi, Arkansas and southeast Missouri, where 80 mph wind gusts and flash flooding were possible.

By Sunday night, the storm systems will be hammering the East Coast. Some New England and mid-Atlantic states could see rare winter thunderstorms.

Tom Kines, an AccuWeather meteorologist, said the unsettled weather comes as a cold front in the northern U.S. clashes with unusually warm and humid air coming up from the South. He said that warm air will lead to record or near-record highs in many places over the next day or two. Nashville could reach into the 70s on Saturday. New York City could approach 70 degrees on Sunday.

The warm air, though, will bring plenty of trouble to some areas.

"I think there's a high likelihood there will be severe storms with hail and damaging wind" in parts of the South, Kines said. "Whether or not there's tornadoes, that's tough to say, but I will say the conditions are right."

Tornadoes are far more common in the spring and summer, but not unheard of in the winter. A tornado outbreak on Christmas Day 2012 reached from northeastern Texas through central Alabama - one twister hit Mobile, Ala. A tornado on Dec. 16, 2000, killed 11 people in Tuscaloosa, Ala.

In Vinita, Okla., on Friday, customers were lining for gas at Diamond Rio convenience store - a common practice when the weather forecast is bad for the region, which was expected to get ice and snow.

Oklahoma gets more than its share of nasty weather, and Vinita resident James Allen took the forecast in stride.

"Right now I don't think it's gonna be that bad," he said. "Might be a little bit of ice and snow but I think it'll melt off in a couple of days."

Farther north, more traditional winter weather was the biggest worry. Kansas City, Mo., was bracing for freezing rain, then 6 inches of snow. In New England, Nikki Becker of the National Weather Service said much of Maine and parts of New Hampshire could get up to a half-inch of ice Saturday night through Sunday morning.

The timing couldn't be worse. AAA is projecting record travel for this holiday period, and spokeswoman Heather Hunter said more than 90 percent of travelers will get there by car. She encouraged drivers to check the weather, not only at their destination but at points along the route, before heading out. Motorists should also make sure their vehicles are road trip-ready, especially the tread and air pressure on the tires. They should also make sure there is plenty of windshield washer fluid that won't freeze.

The good news is that Christmas is mid-week.

"When a holiday falls on a Wednesday it gives travelers more flexibility of either leaving the weekend before, or traveling right before the holiday and extending the trip through the following weekend," Hunter said.