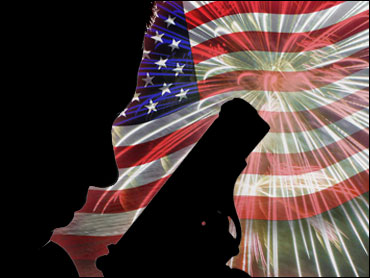 (CBS/AP) - Unfortunately, crime didn't take a holiday on the Fourth of July.

Police in Chicago arrested 11 people Wednesday night after a mob attack in the River North neighborhood during a fireworks display, CBS Chicago reports. Police say a man was beaten and hit in the face by a group of juveniles. No charges had been filed as of early Thursday.

According to the Chicago Tribune, other shootings across the city the night of the fourth left four dead and 19 injured.

In Los Angeles, a 14-year-old girl was killed and two other people were wounded when a gunman walked up to a crowd watching Fourth of July fireworks and opened fire, authorities said. The 14-year-old girl was hit in the upper body, while a 12-year-old girl and a 25-year-old man were each shot in the leg, police said. No arrest has been made and police say the motive for the attack was unclear.

Authorities in Mississippi say they found two people dead from gunshot wounds Wednesday night. Forrest County Deputy Coroner Jonathan Nobles says the bodies of 37-year-old Douglas Regan and 34-year-old Cindy Zepeda were found in a Hattiesburg home about 7:30 p.m. Nobles says both died of gunshot wounds. Nobles says the deaths likely will be ruled a murder-suicide once autopsies are completed.

Two people died and four were injured during two separate shootings in northwest Wash., D.C. during the holiday. D.C. police spokeswoman Gwendolyn Crump says the first shooting Wednesday night in the Fort Totten neighborhood killed a 19-year-old male and injured three other males. That shooting took place as a group was watching fireworks around 8 p.m. Police identified the 19-year-old victim as Crevontai Key of northeast Washington. Police later responded to a shooting in the 600 block of Morton Street about 2 a.m. Thursday. Two men were shot. One man who was shot in the face later died.

Police in Dundee, Ore. say a man whose wife filed for divorce in May killed her and their two children on the Fourth of July and then took his own life. The four people were found dead after a caller told police about an alarming post on a social network.