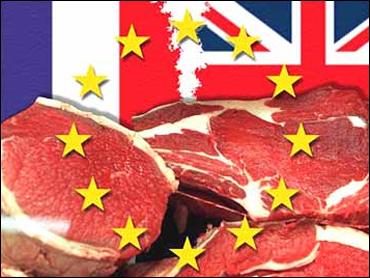 France lifted its six-year-old ban on British beef imports Wednesday, ending a bitter dispute that has strained relations with London.

The government's decision, which came three years after a similar European Union move, followed the recommendation of the French food safety standards agency the meat was free of mad cow disease and no longer posed a health threat.

France banned British beef in 1996 over fears of spreading the disease. The ban deeply angered British farmers struggling to overcome the impact of the disease — bovine spongiform encephalopathy — and last year's foot-and-mouth epidemic.

Until the ban in 1996, France had been Britain's biggest export market for beef.

Prime Minister Jean-Pierre Raffarin lifted the ban after meeting with the National Sanitary Security Committee, an advisory board that includes the ministers of health, agriculture and consumption and representatives from the food agency.

"The three ministries have concluded that there is no public health reason to keep the embargo against British beef," said a statement from Raffarin's office.

British Environment Secretary Margaret Beckett said she was "very pleased" by the decision, but criticized Paris for waiting so long to act.

"It has been a completely unwarranted shadow hanging over our beef industry for more than three years," she said. "I now look forward to the ban being lifted as quickly as possible so that our exporters can work toward recovering markets."

France's food agency concluded on Sept. 20 that British beef was safe to eat and a resumption of imports would not threaten the safety of consumers in France. The government decision on Wednesday was widely expected.

In 1996, the British government acknowledged a link between the cattle ailment and variant Creutzfeldt-Jakob Disease, a similar fatal, brain-wasting disease that occurs in humans.

The European Union banned imports of British beef in 1996 after the first cases of mad cow disease were identified. That ban was lifted in August 1999, and most countries resumed imports.

But France refused to comply, saying its scientific experts believed the beef still carried health risks. Paris continued to defy a ruling by the European Court of Justice that the ban is illegal and faced hefty fines.

David Byrne, EU Commissioner for Health and Consumer Protection, welcomed the decision, telling the British Press Association that it meant "the validity of the EU scientific opinion has been vindicated."

British farmers said France should be held accountable by the European Union for continuing the ban for so long, despite the action on Wednesday.

"It is unacceptable that such a clearly illegal ban has been able to be imposed for this length of time," said Ben Gill, president of the National Farmers' Union. "It is equally unacceptable that the French can walk away from this disgraceful situation at the last possible moment before fines are imposed."