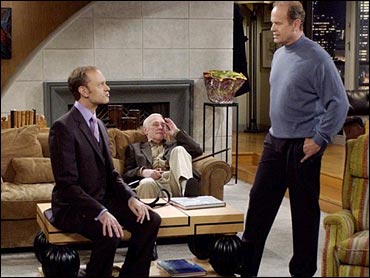 "Frasier" said it's no sin to be picky or brainy - it's just funny - and Thursday's series finale wrapped things up in a fashion even finicky Dr. Frasier Crane couldn't have faulted.

Even better, unlike last week's lame "Friends" conclusion, the "Frasier" farewell managed to make the widely expected (and hoped for) outcome a delightful surprise.

The finale was the end of a TV era, and a personal record for actor Kelsey Grammer, who played the character of pretentious, persnickety and anxiety-prone psychiatrist Frasier Crane for 20 years - tying the record set by James Arness, who played Marshal Matt Dillon on "Gunsmoke" from 1955 to 1975.

Arness never had to wander out of the Wild West but Grammer racked up the years on two shows - debuting as a bachelor doctor at a Boston bar in "Cheers" in 1984 and spinning off in 1993 onto his own series, "Frasier," headed for new adventures in Seattle.

There are no definite plans for the character Frasier to resurface in yet another series, but imdb.com quotes Grammer as saying he's not ruling that out - but to do it, the project would have to be "really good."

Grammer has reportedly discussed the idea with Paramount - the company that produces "Frasier" - which along with CBS, is part of Viacom.

Dr. Crane, fittingly, was on the move again in Thursday night's series finale.

The episode began with Frasier on a jet plane seated beside a beautiful fellow shrink, played by guest star Jennifer Beals.

Where was he flying? Almost instantly, the viewer forgot to wonder as Frasier began recounting to her his last few hectic weeks.

First, he had endured the departure of his latest true love, Charlotte (Laura Linney). They shared a quiet dinner and tender moments, comically bumped heads, and off she went to Chicago. Viewers never saw her again.

Then, as Frasier's brother Niles (David Hyde Pierce) and Niles' wife Daphne (Jane Leeves) awaited the arrival of their first child, the brothers took it upon themselves to orchestrate the wedding of their father, Martin (John Mahoney), to his betrothed, Ronee (Wendie Malick).

But Martin's dog, Eddie, swallowed the wedding ring. Then, after Niles and Daphne rushed the pooch to the vet while the wedding party waited, Daphne's water broke.

Scoring one of the hour's biggest laughs, Niles, the proud new dad, greeted Frasier, Martin and Ronee at the vet's office cradling a monkey with a bottle.

"Don't stare," Martin scolded Frasier. "You were no prize at that age, either!"

With the ring retrieved from Eddie, the wedding went forward right there in the vet's operating room, with Daphne still on the table with her newborn son (needless to say, not the monkey).

Smart, goofy and droll: Just another chapter in Frasier's life.

Then Frasier made a big decision: He accepted an offer to move his radio-advice show to San Francisco. But his announcement to family and friends that he was leaving was first mistaken by them as awful news that he had a terminal illness.

"Cry if you must," said Frasier as they bawled, "but I assure you, when I pass through that Golden Gate, I will be smiling."

And then, returning to the present, there was Frasier on the plane. Headed to San Francisco? No! In a delicious twist, he was landing in Chicago, determined to win back Charlotte.

"Wish me luck," he said to the woman beside him. And every viewer will.

Befitting the NBC series' 11 seasons, the finale was sweet, chaotic and free of sentimental pandering. It was truly touching, blending closure and a question: Will Frasier and Charlotte reunite?

Sometimes a drawing room comedy, sometimes a farce, "Frasier" each week allowed its hero to clash with his unrefined dad, co-workers, and Seattle at large. But he could also engage in sparkling repartee with his likewise erudite and oddball psychiatrist brother, with whom he could swap Freudian psychobabble or expound on grand opera or Limoges china.

Kindred if competitive spirits, they shared a highbrow worldview at once pompous and relatable: Like anybody, they just wanted the best.

And like any caring person, Frasier only wanted to help those less fortunate: the less refined world that surrounded him.

"For 11 years," Dr. Crane told his radio audience on his final "broadcast," "you've heard me say, 'I'm listening.' Well, you were listening, too, and I'm eternally grateful. Goodnight, Seattle."

Millions of "Frasier" fans were saying "goodnight" back.