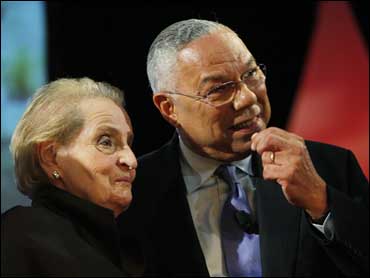 Negotiate with Iran. Close down Guantanamo. Cooperate with Russia.

Candidates Barack Obama and John McCain are not suffering from a shortage of advice. Almost everyone they encounter has his or her two cents worth of opinions to whisper in the candidates' ear. Whether it's from Jane Doe in a coffee shop during a campaign stop or from those on each side who have a professional role to play as they prepare the policy options for the candidates, everyone seems to have something to say to the candidates.

When five former secretaries of state came together for a panel discussion earlier this week the advice had to be considered a cut above what one normally sees not only because it came from people with real first hand experience dealing with the kind of high profile issues the next president will have to face but also because it was given in blunt, straightforward terms and it did not always fit nicely into either McCain or Obama's campaign rhetoric.

Colin Powell, who served under the current president, said the biggest challenge the next president will have is to "start to restore a sense of confidence" in the United States, which could easily be taken as a slap at the man Powell served. Madeleine Albright, who served under President Bill Clinton and directly preceded Powell, concurred. There are "issues out there which can only be solved by reaching out. Reaching out…is a sign of strength," Albright told the gathering, which was sponsored by George Washington University and the Center for a New American Security.

Among the recommendations which were offered to improve America's international image was the closing of the prison camp at Guantanamo Bay, Cuba. Both James A. Baker, III, who served under President George H.W. Bush, and Warren Christopher, who was Mr. Clinton's first secretary of state agreed on that move. Christopher also advocated the next president take "a forward leaning position on climate change" and he got support again from Baker, who added "America will have to lead on climate change."

Iran will be high on the agenda for the next occupant of the White House and all five former secretaries agreed we should find a way to engage with the leadership in Tehran.

Henry Kissinger, who served Presidents Nixon and Ford, told the audience of students, faculty and foreign diplomats, we should not set preconditions for talks and Powell advised not to limit contact to nuclear weapons only but to engage on a wider front.

Albright said Iran has benefitted the most from the war in Iraq and Christopher, when asked about Israel's possible influence on American policy, noted the military options against Iran are "very poor and we have to tell Israel that." Baker said we might employ a containment policy against Iran, noting "we contained the Soviet Union for 40 years."

In the wake of its military moves against neighboring Georgia, how to handle a resurgent Russia was another issue the five former diplomats took on. Kissinger urged cooperation with Moscow while Albright sternly said "Russia cannot think that independent countries on its borders are a threat to them." Powell said Russia acted "brutally…but also predictably." "The Russian federation is not going to become the Soviet Union again. That failed at the box office…." but he added "they do have interests." Baker emphasized a strategic approach, saying we should cooperate where we can and confront them where our national interests lie.

Since this was an event occurring in the heat of a presidential campaign, it was not surprising for the CNN moderators to ask about the effect abroad if Obama were to be elected our next president. Republican Baker agreed it "would send a powerful message abroad and here too." But Baker, who everyone agrees is a very skilled political operative as well as an experienced diplomat, quickly added with a sly smile: "Having said that, I endorsed Senator McCain."

Powell, the first African-American to be secretary of state, agreed the election of an African-American president "would be electrifying." But Powell, also a Republican, said he had yet to decide who he was going to vote for. "I will vote for the candidate I think can do the best job for America, whether that candidate is a Republican, a Democrat, or an independent."

Mixing the serious theme of the event with the silly aspects of a political campaign, Powell said "I'm interested to see what the debates are going to be like because we have to get off this 'lipstick on a pig' stuff and get into issues," perhaps summing up what many Americans may be thinking about the direction the campaign is heading in so far.