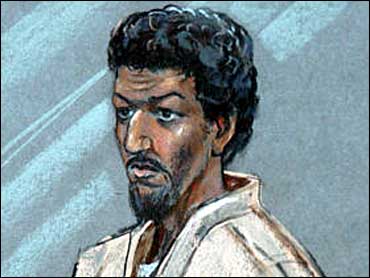 French anti-terrorism agents have arrested eight suspected Islamic militants in connection with a failed plot by a British man to blow up a trans-Atlantic flight last year with explosives hidden in his shoes, police officials said Tuesday.

The arrests of were made during dawn raids in and around Paris, reports CBS News Correspondent Elaine Cobbe.

One of those now in custody is a Muslim holy leader. The raids were conducted at a Pakistani cultural center and mosques frequented by Pakistanis. Investigation sources believe many of France's mosques receive funding from radical Islamic groups.

The avowed follower of terrorist leader Osama bin Laden has pleaded guilty in U.S. federal court to charges he tried to set off explosives in his sneakers during a Dec. 22 flight from Paris to Miami.

The move against Reid's alleged associates is part of a string of terrorism-related arrests in recent days in France, as fears are rising of a potential terrorist strike in Europe.

Defense Minister Michele Alliot-Marie was quoted as saying in an interview published in daily newspaper Le Figaro on Tuesday that France was vulnerable to terrorism.

"France is among the countries most threatened because it is a Western country that has for years joined in the fight against terrorism," Alliot-Marie was quoted as saying.

On Monday, police took into custody six other suspected militants who may have links to a foiled plan for a terrorist attack in the eastern French city of Strasbourg in December 2000.

Police on Tuesday said that one of those arrested was Slimane Khalfaoui, a French citizen of Algerian descent with ties to Afghan terrorist groups. French police have been searching for him since 1996.

Nicolas Sarkozy, France's interior minister, said the arrest of Khalfaoui was "a very important event in the fight against terrorism," the ministry said.

For months, anti-terrorism judge Jean-Louis Bruguiere has been looking into Reid's stay in Paris, searching for contacts he had in France before boarding the flight.

Reid, 29, a British citizen who converted to Islam, was accused of trying to murder 197 passengers and crew members aboard the Paris-to-Miami flight.

He was overpowered and tied to his seat by passengers after a flight attendant saw him trying to light a fuse sticking out of his ankle-high hiking shoes. The flight was diverted to Boston.

Those arrested on Tuesday were being questioned in Paris. Under French anti-terrorism laws, they can be held for up to four days before being officially placed under investigation or released.