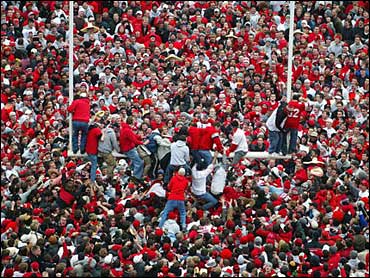 Police fired tear gas and wooden pellets to break up rioting by college football fans who set fire to cars, threw bottles and burned furniture in the streets early Sunday in celebration of Ohio State University's victory over rival Michigan.

In the minutes after the Buckeyes' 14-9 victory, which sealed a 13-0 season for the team and a trip to the Fiesta Bowl, fans swarmed the field and threw chunks of turf at state troopers.

At least a dozen fires were later set near the Columbus campus. Police said 45 people were arrested for disorderly conduct and alcohol violations.

Police at Ohio Stadium used pepper spray to subdue fans who swarmed the field and pushed toward a goal post.

As Christine Dobbyn of CBS Affiliate WBNS reports, rowdy fans rushed the football field and tried unsuccessfully to tear down the goalposts. Several small fires were also reportedly set near campus after the game.

Columbus police say the real trouble, though, didn't start until after midnight Sunday morning, when officers were forced to use tear gas and wooden pellets known as "knee-knockers" to disperse a crowd of several hundred people in an area just east of campus.

Dobbyn says police had to go in with their guard up to get their message out. From the air and from the ground police were greeted by flying bottles.

At one point, nine cars were piled together and burning, Police spokeswoman Sherry Mercurio said. Disturbances continued in portions of a 10-block area for several hours.

"Once we'd get one street under control, the crowds would move to one or two others and things would break out again," she said.'

"Your team has gone 13-0 and you should be darn proud of that fact," Mercurio said. "Instead, you take attention away from that and bring the spotlight on the fact that you can't control yourself if your team wins."

Streets were mostly empty near campus Sunday morning, with a few traffic barricades at some intersections and some uprooted park benches.

Football celebrations got out of hand in South Carolina, California, North Carolina and Washington, as well.

At Washington State University, fans pelted visiting players from the winning University of Washington team with bottles, plastic souvenirs and other debris.

"I feared for my life," Washington athletic director Barbara Hedges said following the dramatic 29-26 triple-overtime win, which was decided by a referee's call that went against Washington State. None of the players was hurt.

In Clemson, S.C., a 67-year-old sheriff's officer and a female fan were injured when fans rushed the field and tore down a goal post following the Clemson Tigers' 27-20 win over South Carolina. Fans piled on top of Officer James Booth, was hospitalized in stable condition. Details on the woman's condition weren't immediately available, but officials said her injuries were not life-threatening.

In Raleigh, N.C., one person's leg was broken and two people suffered knee injuries on the field when fans tore down goal posts following North Carolina State's 17-7 victory over No. 14 Florida State.

In Berkeley, Calif., hundreds of University of California fans overwhelmed security guards and tore down the goal posts following the Golden Bears' 30-7 over rival Stanford. Some of the fans were taken away in handcuffs.