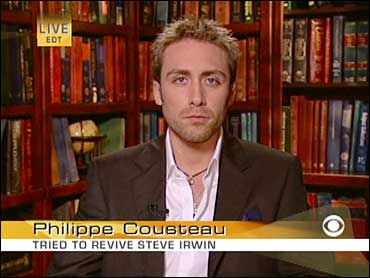 A well-known filmmaker and conservationist who was at sea with "Crocodile Hunter" Steve Irwin last week when Irwin was fatally stung by a stingray refutes speculation that Irwin in any way caused the stingray to attack.

Philippe Cousteau, president of Earth Echo International, was working on a TV documentary with Irwin that the two were co-hosting, and tried to revive him.

Irwin was killed Sept. 4 when he was pierced in the chest by the stingray's barb off Australia's Great Barrier Reef.

His death has prompted an outpouring of grief around the world

"It was a tragic accident, really," Cousteau told co-anchor Hannah Storm on The Early Show Friday. "Steve was free-diving, snorkeling. We were preparing that afternoon to go for a dive for the documentary … and Steve was always so full of life and energy, he just couldn't sit still. So, he wanted to go for a snorkel.

"I wasn't on that dive, but he was doing something that I've seen and done dozens of times, and seen on the cover of scuba diving magazines.

"He was swimming alongside a stingray and the animal happened to whip to the side, and it was just a freakish incident that the tail whipped around and the barb found its way to his heart. He was brought back to the boat, and we did everything we could to revive him but, when we got to the paramedics about an hour later, he was pronounced dead."

Asked about conjecture that Irwin might have somehow antagonized the stingray, Cousteau shot back: "That's untrue and it's ridiculous. He was not doing anything, as I said earlier, that I have not done or thousands of scuba divers haven't done swimming near a stingray. He was not molesting it. He was not touching it. He was doing nothing of the sort."

Cousteau says Irwin's wife and two young children are "going through unimaginable pain right now and our thoughts are with them. One of the things that impressed me the most when I first met Steve is how much he loved his family and how much his family loved him, and his friends. I mean, the whole the zoo and all the staff and everybody I had the privilege to meet and work with, were like an extension of his family."

The Irwins asked Cousteau to finish the documentary, and he just did.

"It was very difficult," Cousteau said, "but when … Steve's manager called me a couple mornings after the tragedy and he asked me to continue with the film, and the rest of the crew, as well, it was an immediate, 'Yes,' of course. But everybody pulled through and made it happen."

The film is called "Ocean's Deadliest," Cousteau pointed out, "and, while we were looking at dangerous and wild animals, some of the most venomous and deadly creatures in the ocean, the conclusion of the film is that humankind is the unsustainable, deadly creature in the ocean, that all of these animals have an important place in the ecosystem, and that it's us who need to learn to live with them.

"And I think that was Steve's message in conservation, and his dedication to exploring and understanding and bringing the wonder of the natural world to people everywhere."

Over $30 million needed for Capitol repairs and security, officials say

The Architect of the Capitol predicted even more funds will be needed, especially if security posture remains high

Cuts to nursing staff and higher use of antipsychotic medications may harm patient care, researchers find.