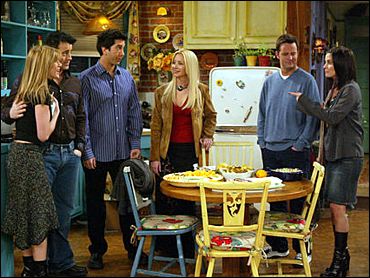 Advertisers are paying up to $2 million for 30 seconds on the "Friends" finale this week, making it the Super Bowl of sitcoms.

That puts Thursday's one-hour finale, which NBC has estimated will draw an audience of at least 50 million people, second in price only to the Super Bowl this year. CBS took in $2.3 million for a half-minute of ad time on the Super Bowl.

The Academy Awards took in $1.5 million per 30-second ad spot on ABC.

"This is one of those rare media events," said Charlie Rutman, president of Carat USA, a major buyer of advertising time for large companies. "It's a program that has captured a generation and a lifestyle for 10 years. It's become more than just a television program."

Some of the companies advertising in Thursday's finale, like Hewlett-Packard and Gatorade, are debuting new commercials on Thursday, just like companies do for the Super Bowl.

Hewlett-Packard's ad will show how the company's technology helped create the animation for the upcoming "Shrek 2" movie, said Scott Berg, director of worldwide media for the company.

Debuting a new ad "makes it that much more special and it sets you apart from those on the stage who might just be running more typical ads," he said.

Gatorade will be continuing its series of ads featuring a youngster who gets to play sports with his heroes. The new ad will feature Jason Kidd, Lisa Leslie and Yao Ming.

The "Friends" finale is considered invaluable not only because of the large audience, Berg said, but because viewers will likely pay closer attention than on many shows. There will be less channel surfing during commercials, he said.

Hewlett-Packard bought ad time for "Friends" a year ago, enabling the company to get lower prices than those who waited, he said.

"The annual Academy Awards come up every year," Rutman said. "The idea of something coming up with so much hype and so much interest - it's like the sun, the stars and the moon all getting lined up at once."

NBC is surrounding the one-hour finale with additional programming: a one-hour special with show highlights preceding it and a two-hour "Dateline NBC" special on Wednesday. In addition, the show's cast will appear on the "Tonight" show Thursday night.

The network said advertisers are being charged a higher premium for these other shows as well.

Bob Flood, head of national broadcast advertising buying at the firm Optimedia, predicted the "Friends" finale won't match the reach of shows like "Cheers" and "M*A*S*H" when they ended.

"This is a much more competitive landscape," he said. "But clearly, NBC is putting a lot of promotion behind this to ensure that it's going to be a ratings success."