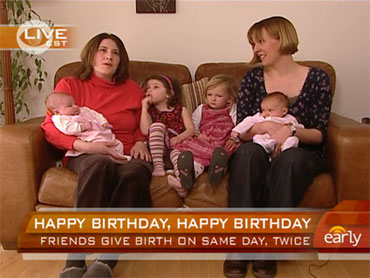 Three and a half years ago Paola Campari Moss and Hannah King gave birth to beautiful baby girls. They were introduced to each other in the hospital by the midwife and they became very good friends - such good friends that their girls shared their next three birthday parties.

Now they have shared another birthday, finding themselves in the hospital having given birth to their second daughters within five minutes of each other, once again on the exact same day.

Although their due dates were about two and a half weeks apart, nature decided to run its course at the same time.

"Hannah, you're in the hospital, you text Paola and all of a sudden you learn you're both having babies again. What's your first thought?" Hill asked.

"I was a bit stunned to be quite honest with you. And it seemed a bit strange because as you say, we were due 17 days apart. But I suppose it was my fault because Oralie arrived a bit early," King said.

Moss and King have a very strong bond, which they attribute to a "very similar upbringing." Being on the same page, they don't argue about how to raise each other's children.

"So it means that if we want to go and do something together as a group, we always manage to choose something that is happy for everyone to do. So we are very lucky though. I don't think it happens all the time. But I think we're both very strong minded, as well, so we both click on that level. We don't annoy each other very often," Moss added.

But will Moss and King's new babies click as well as their oldest girls did?

"I hope so. We would never push them in to it, but I think they will be spending a lot of time together. So I imagine that would generally lead to a friendship. They don't seem to mind each other at the moment, but then they are only nine weeks old," King said.

Kids will be kids, so the older girls' excitement about being big sisters comes and goes.

"And if you two decide to have third children on the same day, please let us know and come back," Hill said. "Two is probably enough for now!"