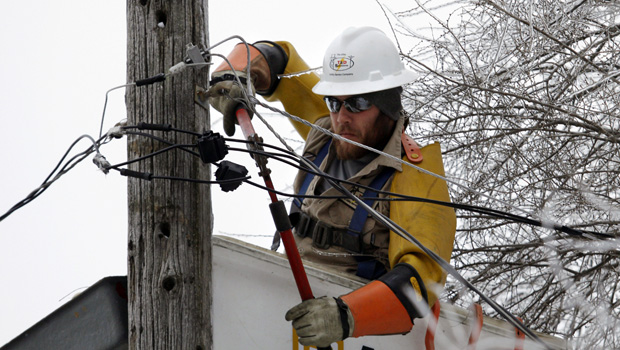 An Arctic air mass in the central part of the United States is sending temperatures plummeting, while a storm system off the Northeast coast will bring heavy snow to parts of New England through early Monday, according to the National Weather Service.

And for New Year's Eve, Danielle Niles, a meteorologist for CBS's Boston station, WBZ, says expect a cold beginning to 2014.

"The issue is going to be the wind," she reports for Boston. "It’ll kick up behind a cold front Tuesday evening, gusting to 30 mph at times Tuesday night. Skies will be mostly clear but wind chill values will be frigid."

Gusty winds in the Midwest will contribute to extremely cold wind chills there. The arctic blast brought wind chill warnings and advisories across the upper Midwest, according to the CBS station in Minnesota, WCCO.  The deep freeze even forced the closure of a ski resort and a skating rink in Duluth Minnesota.

In downtown Duluth, the entrance of a hotel collapsed Saturday night under the weight of snow.  No one was injured.

The coldest air of the season so far is bringing around-the-clock, sub-zero temperatures on the final days of the year.

In Michigan the lights were back on Sunday for all but about 3,900 of the 666,000 Michigan utility customers blacked out by an ice storm that hit the state more than a week ago, but anger at the municipal power company in the state's capital continues to boil.

Michigan authorities blame the storm for at least five deaths -- three killed in crashes and two who died from carbon monoxide fumes from emergency generators.

A week after an ice storm left parts of northern New England in the dark, a fast moving storm is expected to drop heavy, wet snow in parts of Maine, Vermont and New Hampshire that could cause more power outages.

Utility companies in Maine and Vermont were bracing for more outages, with forecasters predicting a band of heavy, wet snow that could dump 10 or more inches in some areas.  About 4,700 customers remained without power on Sunday.

Bangor Hydro Electric spokeswoman Susan Faloon noted that many of those remaining outages affect customers who have been without power for nearly a week.

"On any other day that number might not seem quite so worrisome, but people are cold, tired and frustrated," she said. "And now we have this storm looming over us."

Faloon said some of those customers won't have power restored until Wednesday.

Vermont Electric Cooperative saw outages climb Sunday due to ice on trees and lines, according to its website.

Green Mountain Power spokeswoman Dorothy Schnure said snowfall on trees still caked with ice could prompt a new round of outages in the northwest region of the state. She said people in southeastern Vermont who did not lose power after last week's storm could be affected as well.

Tom Hawley, meteorologist with the National Weather Service at Gray, Maine, said the New Hampshire seacoast will see mostly rain, with interior areas expected to get 2 to 4 inches.

Hawley said Concord, N.H. and southern Vermont could 4 to 6 inches.

"It's going to be a heavy, sticky, wet snow," Hawley said. "It could create some more power outages."