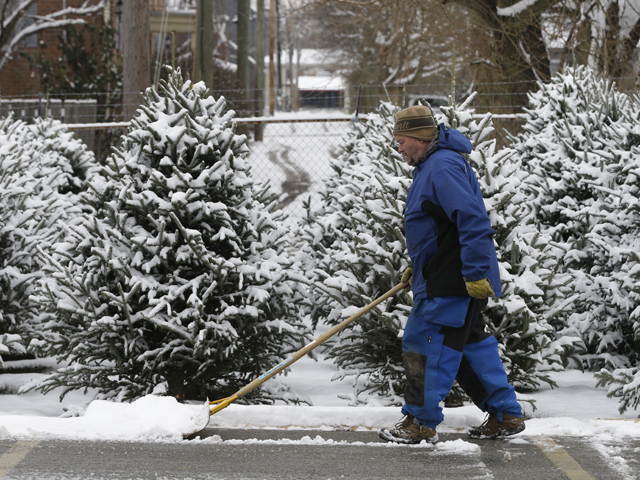 DALLAS  - Freezing rain and stinging winds slammed the Southwest Friday and made a strangely blank landscape out of normally sun-drenched North Texas: mostly empty highways covered in a sometimes impassable frost, closed schools and businesses, and millions of residents hunkered down for icy conditions expected to last through the weekend.

The storm brought frigid temperatures, ice and snow, and is blamed for at least three deaths. More than 300,000 homes and businesses lost power in Dallas alone, and many businesses told employees to stay home to avoid the slick roads.

The winter weather stretched from South Texas, where anxious residents bagged outdoor plants to protect them from the cold, through the Midwest and Ohio Valley and up into northern New England and the Canadian Maritimes.

It forced the cancellation of Sunday's Dallas Marathon, which was expected to draw 25,000 runners, some of whom had trained for months.

Rob Yates, 44, of the Dallas suburb of Rowlett, had trained for four months to participate in the half-marathon Sunday -- his first time competing at that distance. His wife and three children were going to attend the race to volunteer and cheer him on, he said.

Now, "I'll probably be catching up on some work," Yates said, laughing.

He spent Friday at home with his children, who were outside pulling off icicles and wishing more snow had fallen. But Yates, originally from near Manchester, England, said he stayed inside with his wife.

"It's kind of unusual weather for Dallas, so they're just having fun with it," Yates said. "Me and my wife - adults are not particularly impressed with it."

On the roads, it was an uphill battle all day as on-ramps became as slippery as bobsled runs and parking lots became ice rinks.  Thirty cars became stranded on one overpass in Austin. Even first responders needed to be rescued.

Police in Arlington, about 20 miles west of Dallas, reported one driver was killed when his car slammed into a truck. Authorities in Oklahoma reported two weather-related traffic deaths.

Utility crews tried to knock heavy ice off power lines before they snapped from the weight.

People in the area raided grocery shelves and home improvement stores Thursday in advance of what one store manager joked was the Black Friday of bad weather -- "Ice Friday." Most people appeared to heed warnings Friday to stay inside.

Bundled up against the elements, Matthew Johnson was one of the few people braving the cold Friday.

"We're going to walk the dog and have fun outside, I guess," said Johnson, standing near his home in the Dallas suburb of Richardson.

The weather led to more than 1,000 cancellations at Dallas-Fort Worth International Airport, one of the nation's busiest airports and a key hub for Fort Worth-based American Airlines. Many travelers were stuck waiting - and hoping for another flight. Those arriving in North Texas were having trouble finding cabs as many drivers stayed home. Dallas-area light rail trains were not running.

"I don't let things like this stop me," said Dayo Bankale, a taxi driver at the airport Friday. "I'm not scared."

Rosibel Gutierrez Artavia, shivering in a light sweater as she waited for a taxi, had traveled from Alajuela, Costa Rica, to suburban Fort Worth to see family. Relatives called her before she left Costa Rica to warn her to pack warm. But she got the call when she was already at the airport.

"I did not come prepared with snow clothes," Artavia said in Spanish.

But she was thankful the weather didn't prevent her from boarding a flight that got her from Houston to North Texas and close to her family.

"I prayed to God and he listened to me," she said.

Others didn't make it to Dallas at all.

Julie Bahbaz, 31, of Little Rock, Ark., was planning to run in the marathon but decided Friday not to try to drive the more than 300 miles to Dallas shortly before the race was canceled.

"I've been thinking about it for the last couple of days and hoping (the forecasts) were wrong, but apparently not," Bahbaz said.

Temperatures in parts of Arkansas could drop to zero.

That's balmy compared to the snow-swept northern plains. The arctic air mass sitting over the Midwest made it feel like 20 below in Duluth, Minn., the air so cold that steam lifted from Lake Superior.

Storms this week had already dumped 1 to 2 feet of snow in parts of Minnesota and Wisconsin and draped many communities in skin-stinging cold. The temperature in parts of North Dakota on Thursday was a few degrees below zero, but wind chill pushed it to nearly 40 below.