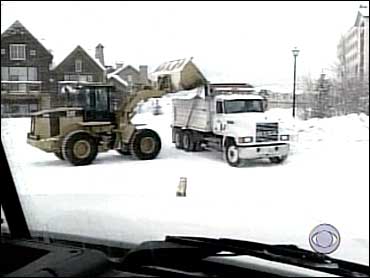 It's hard to walk in Frisco, Colo., where 10 feet of snow has fallen this winter, twice as much as last year.

reports
Andrea Lopez of CBS station KCNC in Denver, the tiny town is running out of places to dump it.

"We're on track for a record year," with what are usually the snowiest months still ahead, says Frisco Street Foreman Brad Thompson.

"This year compared to, oh, probably, the last seven to eight years, it's been pretty astronomical," remarks one town truck driver.

There are piles of snow are all over town. Some drifts are as high as 15-20 feet.

Frisco's snow storage is about 75 percent full and crews are trying to find new places to put the snow, Lopez says. They've been working 50-hour weeks just to keep up.

"Our highest priority is to clear the streets after it snows," the driver says.

And when they get a break from what's fallen, it's time to move the piles from one place to another.

"Three of (the long-term piles) are pretty much maxed out," Thompson says.

Half the allotted snow space is full, and they're filling up the other half. Crews are now using a nine-acre site on the edge of town.

"I believe it's, hopefully, going to be able to carry us through this year," Thompson says.

Those are sites that haven't been used in eight or nine years, Lopez adds.

The town can't dump the snow in local waterways because the snow is full of salt, sand, rocks and trash, which would pollute waterways.