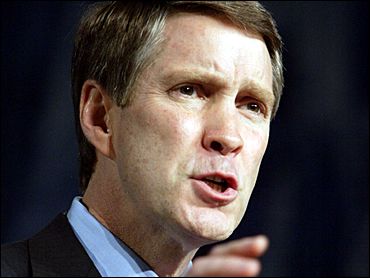 Reacting to a Democratic offer in the fight over filibusters, Republican leader Bill Frist said Tuesday he isn't interested in any deal that fails to ensure Senate confirmation for all of President Bush's judicial nominees.

Senate Democratic leader Harry Reid had been quietly talking with Frist about confirming at least two of Mr. Bush's blocked nominees from Michigan in exchange for withdrawing a third nominee. This would have been part of a compromise that would have the GOP back away from a showdown over changing Senate rules to prevent Democrats from using the filibuster to block Mr. Bush's nominees.

But Frist, in a rare news conference conducted on the Senate floor, said he would not accept any deal that keeps his Republican majority from confirming judicial nominees that have been approved by the Senate Judiciary Committee.

"Are we going to step back from that principle? The answer to that is no," Frist said.

That means he and Reid are still at deadlock, because Democrats have said they would not accept any deals that would permanently ban them from blocking Mr. Bush's nominees to the Supreme Court or the federal appellate courts, the top two tiers of the judicial system.

"As part of any resolution, the nuclear option must be off the table," said Reid, referring to the GOP threat to change the filibuster rules.

Frist and Reid both acknowledged that they are constantly negotiating, trying to find a solution where the Senate does not have a showdown over whether Republicans will change the parliamentary rules to ban judicial filibusters.

Sen. Arlen Specter, R-Pa., chairman of the Judiciary Committee, said Sunday there had been a "a lot of negotiations to try to get three judges from Michigan" confirmed. Other senators have referred vaguely in recent days to discussions surrounding Mr. Bush's nominations to the 6th U.S. Circuit Court of Appeals, whose jurisdiction includes Michigan.

That proposed deal, officials speaking on condition of anonymity said, would include allowing the confirmation of Richard Griffin and David McKeague, both of whom Mr. Bush has twice nominated for the 6th U.S. Circuit Court of Appeals. At the same time, Reid wants the nomination of Henry Saad scuttled. Democrats succeeded in blocking all three men from coming to a vote in 2004 in a struggle that turned on issues of senatorial prerogatives as well as ideology.

Sen. Carl Levin, D-Mich., has led the opposition to all three men. He said Republicans had refused even to hold hearings on two of former President Bill Clinton's nominees to the 6th Circuit.

The officials spoke only on condition of anonymity, citing the confidential nature of the conversations between the two leaders.

Frist would not talk about specifics on Tuesday, but said he would not advocate the withdrawal of any judicial nominee and would continue to insist they all get confirmation votes. "That would mean people in the past as well as the future," Frist said.

Republicans have threatened to use their majority to change long-standing senatorial rules that Democrats used to block 10 of Mr. Bush's first-term appeals court nominations. They fear a Democratic blockade could affect a Supreme Court vacancy if a high court seat opens in Mr. Bush's second term.

Democrats argue that the nominees are too conservative to warrant lifetime appointments to the nation's highest courts. They have threatened to block the seven nominees that Mr. Bush sent back after winning re-election, and any others they consider out of the mainstream of judicial temperament.

Democrats drew criticism when they threatened to slow the Senate's business if Republicans eliminate judicial filibusters. Democratic leaders began stressing an alternative approach Monday, attempting to force debate on their own agenda rather than the president's.

"I've always said that we'd make sure the Senate went forward, but we're going to do it on our agenda, not their agenda," Reid said.

Frist applauded what he called a move by Democrats to back away from their earlier threats to shut down the Senate. "I'm pleased that their caucus is moving away from that threat," Frist said.

Republicans can essentially eliminate judicial filibusters by majority vote, and Democrats concede Frist may be only one or two votes shy of the necessary total. At the same time, internal GOP polling shows lagging public support for such a move, and no showdown is expected until next month at the earliest.