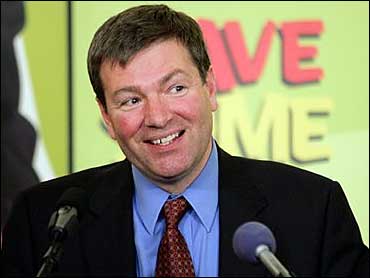 The man who claimed the largest lottery prize ever won in Iowa said Tuesday he plans to keep working, but said he'll throw away his alarm clock.

"I will continue to work, but no more hundred-hour weeks," said the employee of Metro Engineers of Omaha, Neb., a commercial real estate development company. "I will never own an alarm clock again."

Hawkins appeared at a news conference with his wife, Cindy, their 3-year-old daughter and 6-year-old son. Hawkins' 12-year-old son was unable to attend.

"Thank you, I accept," he said, laughing as Ed Stanek, Iowa Lottery director, introduced him and presented a ceremonial check.

Hawkins said it had been something of a "roller coaster year" for his family.

"Back in May 2005, we ran out of money and I needed to file for bankruptcy protection from four credit card companies," Hawkins said. "And now, today, we have a big pile of money."

Hawkins said his first task would be to work out a repayment plan.

"We will become debt free," he said.

Hawkins, whose family moved to Des Moines from Michigan when he was a teenager, said he and his wife plan to set up a foundation to aid startup nonprofit organizations. They also will share some of their winnings with friends and family members.

"I have one brother, and my wife has seven brothers and seven sisters," Hawkins said.

Hawkins said he was on a business trip the week of the drawing and didn't discover he was the big winner until three days later. He stopped at his local Dahl's supermarket, where he purchased the winning ticket and heard people talking about a winner, so he pulled the ticket from his pocket and asked the clerk to check it.

"Well, it was a match, and I haven't slept in 2 1/2 weeks," Hawkins said. "We are going to have some fun. There are definitely some luxury vacations in our future."

According to Eric Hanson of CBS affiliate KCCI in Des Moines, Hawkins headed right back to the supermarket where he bought the winning ducat after the news conference at lottery headquarters.

Workers there, Hanson says, had advice at the ready for Hawkins, telling him to spend they money the way he wants and not let people beg him. The money, they stressed, is his.