In "Everyone Has a Story," every two weeks someone threw a dart at a map of America. CBS News correspondent Steve Hartman then went wherever it stuck, flipped through the local phone book, and picked a name at random. He then did a story on someone at that house.

With the help of space-age technology, Steve Hartman goes global as he continues a new series - "Everbody in the World has a Story."

When the shuttle Atlantis took off last November, to re-supply the space station - it was also carrying something for CBS - a highly-sophisticated news-gathering tool called an inflatable globe.

Its purpose: to help astronaut Jeff Williams determine where my next story lies. Williams spun the globe, and pointed to a random place: Liepaja, Latvia -- a port town of roughly 90,000 people. Which I had to narrow down to one.

Maris Sveiduks told me to meet him at his gym, where the first thing I noticed -- first thing you can't help but notice -- is that the guy is built. And he's 50 years old. He has arms that defy sleeves and a back like a relief map of Switzerland.

Photos: Everybody in the World Has a Story

As a kid, Maris was diagnosed with Hepatitis. It left him scrawny and weak -which is why a movie called "Hercules" struck him.

Maris says seeing bodybuilder Steve Reeves was the pivotal moment of his life.

Unfortunately, his body wasn't so much like Hercules, as it was Pee Wee Herman. He had no clue how to begin training -- and there wasn't a soul in communist Latvia who would dare teach him.

Of all the things the Communist Party was paranoid about, perhaps the most bizarre was body building. It was fine with Olympic weight lifting, but body building was deemed too American -- and it was outlawed.

Undeterred, young Maris turned to the black market. Sailors would often smuggle in contraband which is how Maris got his very first Muscle magazine. It cost him a week's wages. Later he bought more, learned more, trained more.

After the Berlin Wall fell in 1991, guess who got on the cover of a lot of those same magazines?

"When you just gain independence," Maris said, "getting in American magazine was a big achievement."

He also opened his own gym. That was always his other big dream -- although it hasn't come easy either. It seems that every couple years, for one reason or another, Maris has had to re-launch his business from scratch. 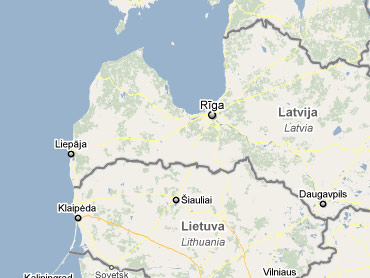 (Google Maps)
The heavy lifting isn't over. Like small businesses all over the world, Maris is struggling in this economy -- just to break even. But when I asked him, why don't you just give up? The question stumped him, at first.

But, he said, "Don't put some fence about your mind. Dream. Dream and try to achieve it."