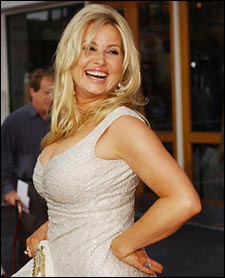 (CBS) - She was a gold-digging dog owner in "Best in Show", a wise manicurist in "Legally Blonde", and perhaps most notably Stifler's Mom in "American Pie." But now comedienne Jennifer Coolidge is getting the regal rolel she deserves as Queen of Orpheus in this year's Mardi Gras celebrations in New Orleans.

The Krewe of Orpheus, one of the largest parades of Mardi Gras, takes place the day before Fat Tuesday. The krewe was started by Harry Connick Jr. and has offered the crown to a host of celebrities in the past. Former queens include Sandra Bullock, Glenn Close and Whoopi Goldberg.

Coolidge is being honored not only for her talent, but for her work in New Orleans following Hurricane Katrina. She bought a dilapidated mansion in the city which she was renovating when the Hurricane struck in 2005.

In a 2007 interview with New Orleans newspaper The Times-Picayune, Coolidge talked about her feelings for the city. "It's the only city I've ever been to that has its own feeling, its own ambiance," she said. "I feel much more fulfilled living in a place like this where people are actually doing amazing things that you get to witness on a day-to-day basis."

Coolidge is perhaps best known for her scene-stealing performance in "American Pie." She developed her skills as a comedic actress in New York and Los Angeles as a member of The Groundlings, alongside comedic heavyweights like Will Ferrell. She broke through on-screen on "Seinfeld," playing a masseuse who wouldn't offer her professional services to boyfriend Jerry.

"My whole life, I've been looking for something like [New Orleans,]" she told The Times-Picayune. "I'm never bored with this city." True enough on an average day.