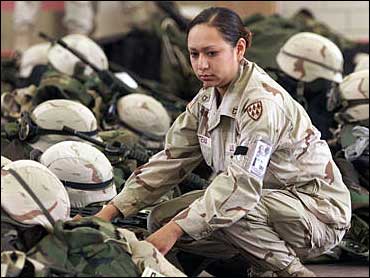 Democratic Gov. Janet Napolitano drew criticism Monday from some Republican lawmakers after asking a state board to rename a mountain peak to honor an American Indian woman killed in the war with Iraq.

Some Republican lawmakers claim Napolitano is "politicizing" the death of Army Pfc. Lori Piestewa, a Hopi Tribe member from Tuba City who was killed in Iraq last month. Many American Indians find the name of Phoenix's Squaw Peak offensive and have tried for years to rename it.

"It seemed to me (an opportunity) to make lemonade out of a lemon," said Napolitano, who considers the name an embarrassment.

Republican state Rep. John Allen said Napolitano inappropriately merged renaming the peak with honoring Piestewa. The state should deal with the issues separately and honor all Arizonans who died in the war, he said.

"They have taken an individual who has done a great service for their country and tried to use that person posthumous to get a political end they couldn't get themselves," Allen said. "That's wrong."

Even though the chairman of the Arizona Geographic and Historic Names Board has threatened to block her plan, Napolitano said she will continue to push the name change.

Man-made features can be named even after the living, but state and federal policies on geographic titles say there must be a five-year waiting period after a person's death before the name can be used.

Tim J. Norton, who heads the geographic board, has said the board shouldn't abandon the guidelines because renaming geographic features shouldn't be an emotional issue. He couldn't be reached for comment late Monday.

Critics claim "squaw" is derived from an Indian word for female genitalia, although some linguists disagree.