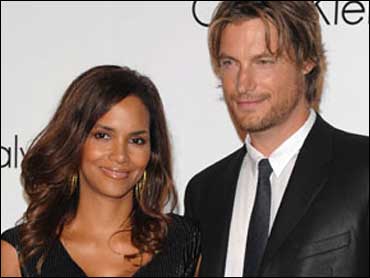 NEW YORK (CBS) Things are heating up between model Gabriel Aubry and ex-girlfriend, actress Halle Berry, over custody of their two-year-old daughter, Nahla.

Two days after Berry's rep said the Oscar-winner is pulling out of the film "New Year's Eve" to prepare for the custody litigation, Aubry has issued his own words on the matter via his rep at Wilhelmina Models.

"While Gabriel is disappointed in Halle's decision to falsely malign him publicly and for her own purposes, he refuses to be pulled into her dispute over a canceled film production," his rep said in the statement obtained by Access Hollywood. "Gabriel also refuses to air their issues in the press as he believes this may ultimately harm their daughter. The fact is that Gabriel is a caring father who shares custody of Nahla."

"Halle's continuing allegations in the press are untrue and irresponsible," Aubry's rep added.

On Dec. 30, Aubry filed court papers to be formally recognized as Nahla's father and is seeking joint legal and physical custody.  The two split in April.

A spokesperson for Berry, 44, stated Mondayto People magazine that she has "serious concerns for her daughter's well-being while in the care of her father for any extended period of time and is prepared to take all necessary steps to protect her."

"She has attempted to resolve these custody issues amicably with her daughter's father, Gabriel Aubry, directly, but given his lack of cooperation, Halle has no choice but to seek swift judicial intervention," her rep added.