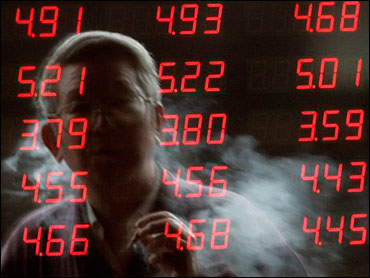 Underpinning the modest gains was a U.S. government report Friday that showed the contraction in the U.S. economy slowed to 1 percent in the second quarter, adding to hopes the recession is nearly over. The data also beat expectations with analysts forecasting a 1.5 percent drop.

Despite the relatively positive news, some still believe the numbers don't accurately reflect the status of the economy.

"This is simply a bandaid approach by printing money," Ann Lee, a finance professor at New York University, told CBS News correspondent Bianca Solorzano for CBS' "The Early Show." "This is not done, this has not played out yet."

Surveys showing that manufacturing in the world's No. 3 economy China is expanding provided more evidence of economic revival and lifted Chinese shares to a 14-month high.

Banks led Asia's rise following better-than-expected earnings from some big lenders and on optimism that financial institutions are bouncing back from the financial crisis. Auto stocks also rose strongly.

"Hopes for good earnings has been driving stocks higher," said Motomi Hiratsuka, head of sales trading at BNP Paribas in Tokyo. "It looks like corporate restructuring efforts are paying off. But it remains to be seen whether companies can start expanding profits now."

Fueling the momentum among Japanese banks was Mitsubishi UFJ Financial Group Inc., which shot up 6 percent. Japan's biggest bank reported Friday that its net profit for the April-June quarter surged 48 percent from a year earlier to 75.9 billion yen ($798 million).

"For HSBC, the expectation is that the worst is over," said Francis Lun, general manager at Fullbright Securities in Hong Kong.

Among other strong performers, Japan's Nissan Motor Co. rose 5.4 percent after the automaker unveiled its new zero-emission vehicle on Sunday. The "Leaf" hatchback is set to go on sale in Japan, the U.S. and Europe next year. The world's top automaker Toyota, which releases quarterly earnings Tuesday, rose 2.5 percent.

Before the weekend, traders used the brighter news about the U.S. economy to give the Dow Jones industrials its best July in 20 years.

Oil prices jumped above $70 a barrel on investor expectations a recovering global economy will boost crude demand. Benchmark crude for September delivery was up $1.15 to $70.60 a barrel in electronic trading on the New York Mercantile Exchange. On Friday, the contract rose $2.51 to settle at $69.45.