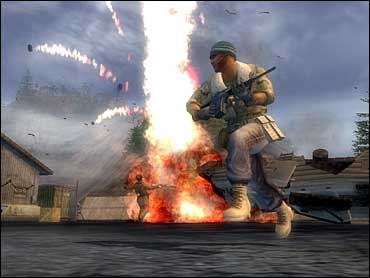 Game Core is a weekly column by CBSNews.com's William Vitka and Chad Chamberlain that focuses on gamers and gaming.


For gamers who think that blowing stuff up gets them just a bit closer to heaven, is nirvana.

Pandemic Studio's game, published by LucasArts, is all about destruction.

It's more fun than a barrel of explosive monkeys.

I've spent hours running through the game planting explosives next to useless targets just to watch them go boom and shoot into the sky or off into the distance. Thanks to 's use of the Havok physics engine, you're able to blow up just about anything. And let me tell you, blowing stuff up has never looked better.

Now, I'm okay with a game's focus being creative demolitions, but what about – I don't know – some kind of plot?

Yes, has a story. You take control of either an ex-marine, bounty hunter, or British secret agent and head into the chaos-laden region surrounding North Korea to work for the client of your choosing.

Released into an expansive, free-form playground chock full of pretty toys, lots of money, and countless things to make go boom, you partake in a political tug-of-war and make your fortune.

Though I don't like to draw comparisons, imagine game play a bit like the Grand Theft Auto series, but with better graphics, less hookers, more fun, and more weapons.

More fun, less hookers? I know it sounds crazy, but it's true.

Even the dialogue is fun, goofy in that over-the-top action movie kind of way. "GET ME A MONKEY," screamed by an oft-nonsensical Russian Mafioso being my favorite example.

Speaking of which, the voice work in the game is definitely good. Peter Stormare, who's been in "The Big Lebowksi" and "Windtalkers" among other films, lends his throat to the Swedish bounty hunter Mattias Nilsson, and does an excellent job as does the rest of the cast.

Graphically, the game looks great. As one would expect, it looks a bit better on the Xbox than the PS2. Loading times are pleasantly short, the world you run amok in is huge and everything is pretty crisp (and depending what you've blown up, crispy).

is just fun. I've rarely gotten so much enjoyment out of a game. It isn't frustrating, it isn't too tough or too easy, it's just right.

I'm going to come out and say that might be my favorite Xbox game of 2005. I know the year's just gotten started, but bullocks to you.

It will rock your face off.

Mercenaries is a revolutionary third-person combat-action game that delivers the next level of free-form game play in massive interactive environments. The game gives players the opportunity to take on the role of a soldier for hire in an open-ended world. Mercenaries is set in North Korea in the near future, where a coup has plunged the troubled nation into chaos. An elite private military company, Executive Operations, has dispatched a mercenary to track down the "deck of 52" fugitive members of the old hardliner regime – before they can launch a nuclear attack. The nonstop action within Mercenaries is heightened by the integration of the Havok physics engine, making everything within the environment act and react as it would in real life.

In the game, players choose to be one of three mercenaries: an American ex-soldier, a British secret agent, or a Swedish bounty hunter. Each playable character has unique strengths and weaknesses that affects game play. For example, characters demonstrate increased expertise such as stealth, speed, or sniping allowing for unique interactions with the international factions, including China, North Korea, and the Russian Mafia. Players choose to make enemies or form alliances with these factions in order to obtain new vehicles and weaponry and unlock new bonus missions that are specific to each faction.

Players stock up on more than 30 different types of real-world weaponry including grenades, sniper rifles, rocket launchers, and air strikes that are capable of demolishing an entire city block. Within the environment, characters gain access to more then 30 authentic ground and air vehicles, including helicopters, cars, jeeps, tanks and SUVs, that they use to travel throughout the world and accomplish their objectives. If you can see it you can steal it, use it, or blow it up.