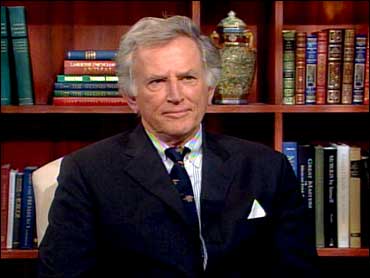 Political pollsters say Democrats have the best chance to regain control of congress since the republicans took over 12 years ago.

But former Democratic senator from Colorado and presidential candidate Gary Hart says his party still needs more political courage. His new book "The Courage of Our Convictions: A Manifesto For Democrats" tries to move his party to find a new way to speak to America.

Hart, who dropped out of the presidential race in 1988 when an extramarital affair became public, opens the book with a quote from the medieval writer Dante, who said that there is a special place in hell for those who, in times of moral crisis, preserve their neutrality. It's something Hart said the Democrats are guilty of on issues of security and especially on the war in Iraq.

"There was a sense that to demonstrate that we were as committed to national security as Republicans, that many democratic leaders, elected officials, went along and voted for very questionable invasion," he told The Early Show co-anchor Harry Smith.

Hart said that since the Vietnam war, the Democrats have been adrift to some extent, lacking a definable issue.

"Since then, some of us have been making an effort to re-establish our credentials on national security and foreign policy," he said. "What I argue in the book is that we should go back to the basic principles of the party in the 20th century — under Roosevelt, Truman, Kennedy and Johnson — and extract from them some central principles, core beliefs that identify us distinctly from republicans and not fuzz up the difference and seek some center."

Hart says that a national election cannot be won without speaking to the middle and getting independent voters to identify with the Democratic party.

"This book was written because people would stop me on the street of Denver and say, 'What do the Democrats stand for? What do you believe?' " Hart said. "And it has been that sense of drift for 25 or 30 years that has caused people to say, 'I'm not quite sure who you and what your core beliefs are.' "

Part of the problem, Hart said, is that both the Democrats and Republicans are beholden to special interests and coddle lobbyists in exchange for financial support.

"Corruption was defined from the very beginning, including our own founders, as putting special interests ahead of the common good, and that's exactly what has happened in this country in the 20th century," he said. "By that definition of putting special interests first, we are a profoundly corrupt republic. Most Americans know that. And they want politicians to put the national interests first, not the party or the XYZ group."