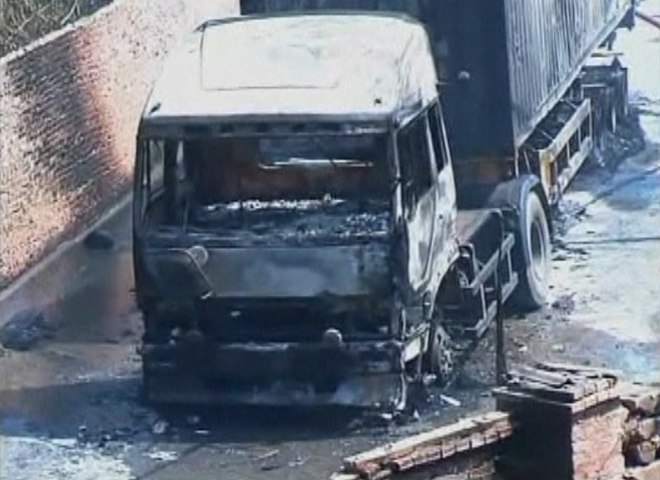 (AP) BEIJING - A tanker truck filled with gasoline collided with a truck in southern China on Friday, setting off an explosion and a massive fire that left 20 people dead and 14 others hurt, including at least two with severe burns.

The tanker was carrying 40 tons of gasoline when it crashed into the other vehicle early Friday morning on an expressway in Guangzhou city, capital of Guangdong province, the official Xinhua News Agency said.

Oil leaked from the tanker truck and triggered an explosion that set a timber mill and work sheds located under the expressway bridge on fire, Xinhua said. Most of those hurt were workers from the factory and one of them was severely injured, it said.

Other Chinese media reported that the fire blazed across 2,400 square yards, burning several other vehicles.

As the fire raged in the pre-dawn hours, nearby residents heard at least two loud bangs, according to a man surnamed Xu who lives in Honggang village, about 1.3 miles from the accident site.

"There often are overloaded container trucks passing by, so I thought maybe a container fell off a truck and did not think too much about it," Xu told The Associated Press in an online interview.

"But when the second bang went off, the force of the explosion was so strong it made me bounce a little on my bed," said the man who works in a telecommunications company.

A woman who answered the phone at the propaganda office of the Guangdong Provincial People's Hospital in Guangzhou said the facility was treating two of the injured people. One suffered 80 percent burns and the other, 90 percent, she said.

Xinhua cited the Guangzhou city's Internet information office's microblog account. The office's phone number was not listed. Officials from the city's government, police and fire brigade either could not be reached or said they had no information about the accident.

Footage on state broadcaster CCTV's noon bulletin showed the fire had been put out.

State media say poorly maintained roads and bad driving habits result in about 70,000 deaths and 300,000 injuries a year in China.