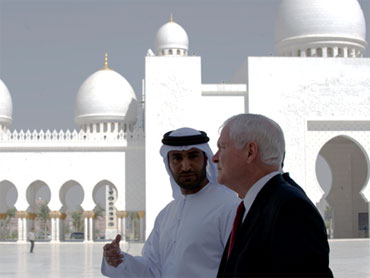 U.S. Defense Secretary Robert Gates said Thursday that Iranian support for the Taliban in Afghanistan is "pretty limited" - so far.

Gates noted that he had a public exchange of barbs with Iranian President Mahmoud Ahmadinejad this week over which country is doing harm in Afghanistan. He had accused Tehran of undermining U.S. and NATO efforts by helping the Taliban.

"I have talked about Iran playing a double game in Afghanistan, wanting a good relationship with the Afghan government and wanting to make our lives harder," he said.

"At this point the level of their effort I think is not a major problem for us," Gates said. "The level of their support for the Taliban, so far as best we can tell, has been pretty limited. I was just trying to express the hope that it wouldn't get any worse."

In Riyadh on Wednesday, Gates told Saudi leaders Wednesday that the U.S. effort for diplomatic engagement with Iran had come to naught and asked for the influential kingdom's help to win wide backing for strong economic penalties against Tehran.

The offer of talks with Iran to resolve doubts about the intent of its nuclear program remains on the table, U.S. officials said, but the United States has moved away from making outreach to Iran the primary goal.

Ahmadinejad responded Thursday, saying, "The Iranian nation will not allow the world power (the U.S.) to corrupt and create chaos in the Persian Gulf."

"You are wrong if you think that you will be able to dominate the oil of Iraq and the Persian Gulf through deploying military forces," Ahmadinejad said. "The young people of the region will cut your hands off of the Persian Gulf Oil."

"Pakistanis, Afghans, the Persian Gulf states should be watchful," Ahmadinejad told a crowd at the southern Iranian port of Bandar Abbas. "They do not serve anybody."

Gates was in Afghanistan for three days this week. He spoke Thursday at a military base that is home to an Air Force refueling and surveillance operation serving the war in Afghanistan.

The Pentagon asked press traveling with Gates not to name the base.