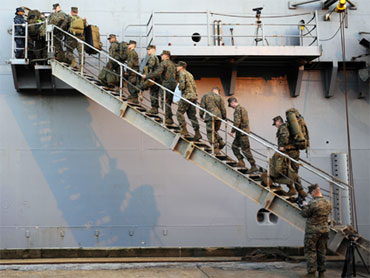 The U.S. military is sending additional ships to help with earthquake recovery in Haiti, including one that could remove debris blocking the main port, U.S. Defense Secretary Robert Gates said Wednesday.

Speaking during a visit to India, Gates said the ship could help get the port back in operation within a week or two.

The Pentagon also reported Wednesday that a Navy hospital ship, the USNS Comfort, had received its first Haitian patients. A 6-year-old boy and 20-year-old man, both severely injured, were flown by Navy helicopter from the aircraft carrier USS Carl Vinson to the hospital ship, which was still steaming toward Haiti.

Many challenges remain, Gates said. "As long as more than 2 million people in Haiti are still struggling to get food, water and medical care," he said, no one should be satisfied with the level of effort.

"Help has poured into the area," Gates said, but "getting around the city is a major challenge."

Some 800 Marines moved ashore Tuesday in Haiti, ferrying supplies on helicopters and Humvees as the U.S. military force there swelled to as many as 11,000.

Military officials said troops and supplies were arriving as fast as possible despite daunting logistical hurdles. Army Maj. Gen. Daniel Allyn, the deputy commander for military operations in Haiti, said the military has delivered more than 400,000 bottles of water and 300,000 food rations since last Tuesday's earthquake.

"I think supplies are beginning to get out to the people," Gates said Wednesday. "There is a concern that if you are unable to get significant supplies out, then in their desperation people would turn to crime and violence. We have not seen much of that happening.

"Given the magnitude of the disaster, the Americans in particular can be very proud of their effort," the defense chief said.