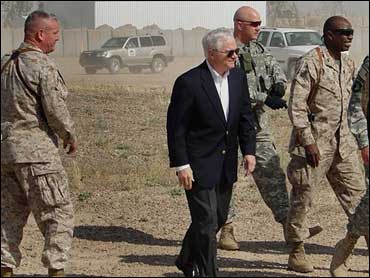 Defense Secretary Robert Gates said Sunday that U.S. troops probably would remain in Iraq for a "protracted period," but at a reduced level and with a more limited mission.

With the Senate expected to resume debate this week on anti-war legislation, Gates said he would recommend that President Bush veto a proposal by Sen. Jim Webb, D-Va., that would require troops get as much time at their home station as their deployments to the war front.

He would not how large a force he envisioned in the coming years. "I don't know what the numbers would be," the Pentagon chief said in a broadcast interview.

"Assuming the conditions prevail in Iraq that allows us to continue the drawdown that the president has talked about, the idea is that we would have a much more limited role in Iraq for some protracted period of time, a stabilizing force, a force that would be a fraction of the size of what we have there now," Gates said.

Mr. Bush has compared America's future in Iraq to the peacekeeping role U.S. troops play in South Korea, where they have been stationed for some five decades.

"That history remains to be written," Gates said. "In part it will depend on what kind of condition we leave Iraq in."

Mr. Bush announced last week that he had approved a plan by Gen. David Petraeus, the top U.S. commander in Iraq, to withdraw 5,700 troops from Iraq by the holidays and reduce the force from 20 combat brigades to 15 brigades by next July.

On Friday, Gates raised the possibility of cutting troop levels to 100,000 or so by the end of next year, well beyond the cuts Mr. Bush announced.

The president has ordered Petraeus to make a further assessment and fresh recommendations in March. There are about 169,000 U.S. troops in Iraq today.

Looking ahead to the Senate's debate on Iraq policy, Gates took issue with Webb's proposal.

"It would be extremely difficult for us to manage that. It really is a backdoor way to try and force the president to accelerate the drawdown," Gates said. "Again, the drawdowns have to be based on the conditions on the ground. We have to leave Iraq in a much more stable place than it has been over the last two or three years."

If Webb's amendment were enacted, Gates said it would force him to consider again extending tours in Iraq.

"Extensions are a possibility if we were to have to comply with a law like that, that gave us no flexibility. We would have to cobble together units from various smaller units and individuals that wouldn't have trained together," Gates said.

Active-duty Army units today are on 15-month deployments with a promise of no more than 12 months rest, and Marines who spend seven or more months at war sometimes get six months or less at home.

"We're having difficulty trying to keep to my policy of 15 months deployed, 12 months at home, for the active force and a full-year mobilization limit on the Guard and Reserve. We're having enough trouble trying to make that work, without the strictures of legislation," Gates said.

Gates spoke on "This Week" on ABC.