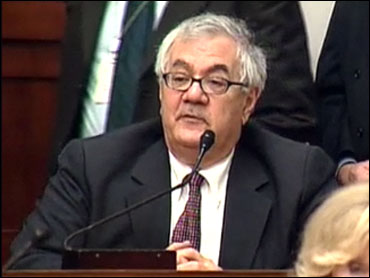 Gay marriage supporters are moving to repeal a law that denies federal benefits to same-sex couples, but there's little chance of a vote this year.

Repeal legislation to be introduced Tuesday has at least 76 House sponsors. A spokesman for the lead sponsor, Democratic Rep. Jerrold Nadler of New York, acknowledged that repealing the Defense of Marriage Act was not a priority for movement anytime soon.

The 1996 law bars federal recognition of gay unions, including the granting of Social Security survivor payments and other government benefits to couples. The law even bars same-sex couples from receiving the benefits in states that have legalized their marriage.

President Barack Obama pledged as a candidate to work for repeal. Last month, the president insisted he still wants to scrap what he calls a discriminatory federal marriage law, even though his administration angered gay rights activists by defending it in court.

Ilan Kayatsky, spokesman for Nadler, said the repeal was being introduced now primarily "to gain support and momentum and educate people." Nadler chairs a Judiciary subcommittee that would consider a repeal.

Rep. Barney Frank, D-Mass., an influential, openly gay lawmaker, favors repeal but has not signed on as a co-sponsor of Nadler's bill. Frank believes the legislation would have little chance of passage, because it would allow same-sex couples to take their partnership benefits across state lines, said spokesman Harry Gural.

The president of a gay advocacy group, the Human Rights Campaign, said Frank's disagreement was about tactics, not the goal of repeal.

"We're making a case for an ambitious bill, and I don't have any illusions that it will be easy or happen overnight," added the group's president, Joe Solmonese.

There also has been no movement for repeal in the Senate, where it would be difficult to gain the 60 votes needed to break a filibuster.