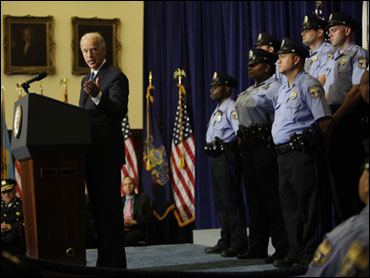 Israeli troops blew up two apartment buildings in a Gaza Strip refugee camp Wednesday, just hours after undercover forces killed the brother of a radical Palestinian leader during an arrest raid in the West Bank.

The Israeli strikes, which came a day after a Hamas sniper killed an Israeli soldier, further undercut shaky attempts to reach a partial truce. However, officials from both sides said Wednesday they were not walking away from the deal.

In the agreement reached earlier this week, Israeli soldiers withdrew from the West Bank town of Bethlehem and were to pull back from positions in Gaza, in exchange for Palestinian efforts to maintain calm in the test areas.

Militant Palestinian groups have rejected the plan and said they would carry out more attacks on Israelis. On Tuesday, a Hamas sniper firing from the Khan Younis refugee camp killed an Israeli soldier guarding nearby Jewish settlements, in what the Islamic militant group said was an attempt to disrupt the truce.

In response, Israeli troops backed by tanks and helicopters blew up a five-story and a six-story building in Khan Yunis in what the army said was an operation to prevent gunmen from firing on nearby Jewish settlements.

A 24-year-old Palestinian was killed when he was struck in the head and back by shrapnel, hospital officials said.

The explosion also damaged eight nearby smaller homes, making them uninhabitable, Khan Younis municipal officials said. In all, 100 people were made homeless - 80 had lived in the smaller homes and 20 in the apartment blocs, the officials said. The two apartment buildings had been largely abandoned in recent months after coming under frequent fire during Israeli raids.

Nawal Hassouneh, 11, picked through the rubble of her one-story home Wednesday, retrieving a tattered school bag her father had bought her a day earlier. "They killed my joy," she said. "I had been so happy about the bag. Now I have no home and no bag."

The soldier killed Tuesday, 19-year-old Kevin Cohen, had immigrated from Iran in 1987. He was in an outpost when a sniper's bullet hit him in the head.

The violence Tuesday and Wednesday delivered serious shocks to the security deal reached Sunday between Israeli and Palestinian officials, in which Israel pledged to ease a clampdown on Bethlehem and Gaza in return for reduced Palestinian "terror and violence." In accordance with the deal, troops ended military operations in Bethlehem Tuesday.

The Israeli soldier was shot to death a few hours later.

Israeli Defense Minister Binyamin Ben-Eliezer said on Army Radio he had warned Palestinian security officials that Israel would not tolerate any violence.

"I repeated in the sharpest terms that if they don't take the situation in hand immediately and bring about an end to the shooting of mortar shells we will do it."

Army spokeswoman Brigadier Ruth Yaron said on Army Radio: "In Bethlehem it was possible to deploy...in the Gaza Strip, we see in recent days no sign of an attempt to preserve quiet."

Palestinian police moved on to the streets of the West Bank city of Bethlehem and nearby towns on Tuesday after the Israeli army said it had ended military operations. The army did not have permanent positions but its forces enforced a curfew.

The new security agreement was strained on Tuesday after Israeli forces killed the brother of the leader of a militant Palestinian group in Ramallah, drawing a threat of retaliation.

An Israeli army spokesman described Saadat, 23, as himself a PFLP militant. He said Saadat had opened fire at troops who tried to arrest him, and they fired back, killing him.

The PFLP has vowed revenge.

Bethlehem is one of seven Palestinian-ruled cities seized by Israel in June following a spate of Palestinian suicide bombings. Israeli troops remain on Bethlehem's outskirts.

At least 1,507 Palestinians and 589 Israelis have been killed since the Palestinian uprising for independence began in September 2000 after peace talks stalled.