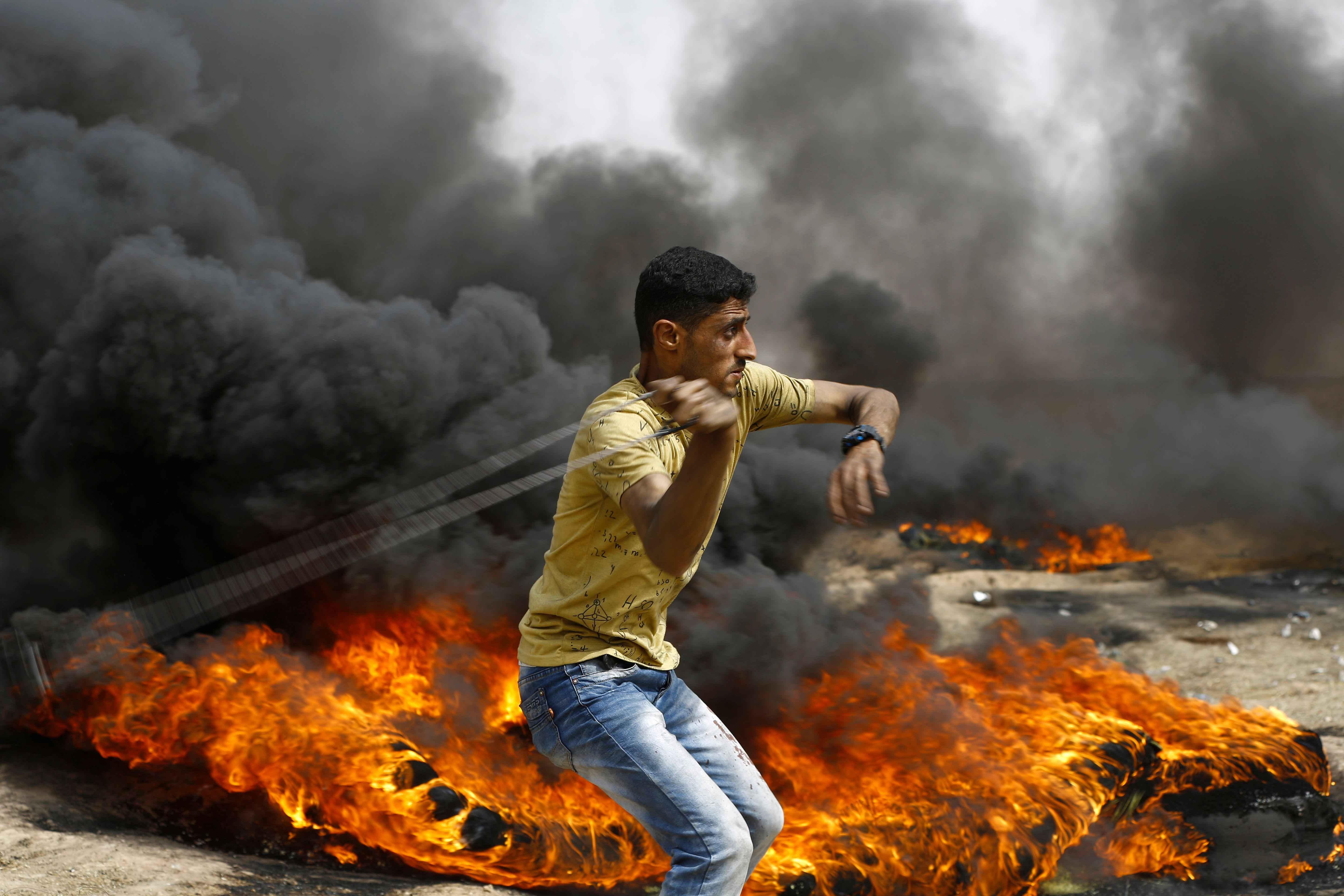 GAZA CITY, Gaza Strip -- Israel's Defense Minister has shrugged off threats by Gaza militants who released a video clip showing army officers through the cross-hairs of a Palestinian sniper. Avigdor Lieberman was visiting near the Gaza border Friday when asked if he was worried. He answered "you see I arrived here and came without a bullet proof jacket even." He said he trusts the Israeli army to protect him.

The Palestinian Islamic Jihad group had released a clip of senior Israeli officers seen through a sniper scope.

Gaza's Islamic militant Hamas rulers have called for a mass rally at the border as part of a weeks-long campaign of protests against a decade-old blockade of the territory.

Israel is closely guarding the fence and warns it will not tolerate attempts to breach it.

The protests are part of what organizers, led by Gaza's ruling Hamas group, have billed as an escalating showdown with Israel, to culminate in a mass march on May 15. Organizers have made conflicting statements about whether they plan an eventual mass border breach.

Before Friday, 28 Palestinians were killed and hundreds wounded by Israeli troops firing from across the border fence.

Hamas says the protests are aimed at breaking a crippling border blockade that was imposed by Israel and Egypt after the Islamic militant group overran Gaza in 2007, a year after winning Palestinian parliament elections.

The marches also press for a "right of return" of Palestinian refugees and their descendants to what is now Israel. Hundreds of thousands of Palestinians fled or were forced from homes in the 1948 war over Israel's creation. Palestinians mark May 15, the anniversary of Israel's founding, as their "nakba," or catastrophe, to mourn their mass uprooting.

"We will stay here until we reclaim our lands," said Ahmed Nasman, 21, speaking in a protest tent camp east of Gaza City, as activists near him prepared kites. "Every day, we will come here with a new way to resist them," he said, referring to Israel.

The kites are part of a new tactic aimed at setting fields on the Israeli side on fire. Most kites were stitched together in the colors of the Palestinian flag. One white kite bore the Nazi swastika.

Earlier Friday, Israeli military aircraft had dropped leaflets urging Palestinians to stay away from the fence and warning that they endanger their lives if they follow Hamas directives.

The military has said it is defending Israel's border and that its troops, including snipers, only target "instigators." It has also accused Hamas of using mass protests as a cover for attacks.

Israel has faced international criticism for its response to the mass marches. Rights groups have branded open-fire orders as unlawful, saying they effectively permit soldiers to use potentially lethal force against unarmed protesters.

White House envoy Jason Greenblatt, a member of President Donald Trump's Mideast team, said on social media that Palestinians in Gaza have a "right to protest their dire humanitarian circumstances."

Organizers "should focus on that message, not stoke the potential for more violence with firebombs and flaming kites, and must keep a safe distance from the border," said Greenblatt, adding that "the cost of these demonstrations is too high in loss of life and injuries."

While Hamas and smaller Palestinian factions have taken a lead as organizers, the mass marches are also fueled by growing desperation among Gaza's 2 million residents.

The border blockade has trapped nearly all of them in the tiny coastal territory, gutted the economy and deepened poverty. Gaza residents typically get fewer than five hours of electricity per day, while unemployment has soared above 40 percent.

Meanwhile, U.S. actress Natalie Portman, this year's recipient of a prize dubbed the "Jewish Nobel," has pulled out of the June awards ceremony in Israel because of extreme distress over recent events in the country, the Genesis Prize Foundation said. The foundation said it was informed by Portman's representative that the Jerusalem-born Oscar winner "does not feel comfortable participating in any public events in Israel."