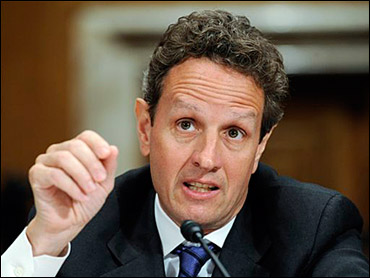 (AP Photo/Susan Walsh)
Treasury Secretary Timothy Geithner appeared to have lost his cool in an hour long meeting with financial regulators last Friday, according to a report in the Wall Street Journal today.

An official told the WSJ that they felt surprised at Geithner's tone and attitude at the meeting. Mr. Geithner stated that "enough is enough" after listening to concerns over the proposed financial overhaul by the Obama administration.

Since the plan was released in June, it has faced much criticism from the industry, and some financial regulators are weary of allowing the government to enter their "turf." The administration's proposals include creating a new federal agency to oversee consumer regulations, merging two bank regulators and allowing the government to take over large financial companies.

According to the Journal, Friday's meeting was also unusual because of Geithner's use of obscenities and aggressive posture taken toward even some independent regulators. Geithner said the executive and legislative branches of the government set policies, not the agencies.

Neal Wolin, the Treasury's deputy secretary, told the Journal that that Geithner explained to the group that "they have the prerogative to express their views, but he wanted to make sure that, since everyone had agreed on the importance of achieving reform this year, everyone stayed focused on that goal."