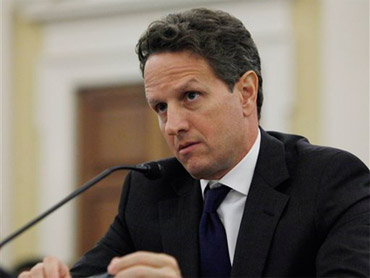 Treasury Secretary Timothy Geithner says the U.S. must cut the annual federal budget deficit, now more than $1 trillion, for the economy to have a sustained recovery and he's not ruling out new taxes.

He said the country needs to understand the Obama administration will do what's necessary. He did not detail how the government plans to shrink the deficit, though he said overhauling the health care system and lowering costs are essential.

"When we have recovery established, led by the private sector, then we have to bring these deficits down very dramatically," he told ABC's "This Week" in an interview broadcast Sunday. "And that's going to require some very hard choices. And we're going to have to do that in a way that does not add unfairly to the burdens that the average American already faces."

Geithner also said private economists generally expect to see growth later this year and unemployment to ease in the second half of next year.

Any sustained recovery must rely on business investment and hiring, he said. Geithner said the administration will stick with its economic efforts until there a strong private sector-led recovery is in place.

Geithner said the White House wants a health care bill that has broad support on Capitol Hill. But he said the decision of whether "to help shape this and be part of it" is up to lawmakers.

"Or do they want this country . . . to go another several decades without doing what every other serious country has done. Which is to give their citizens access to basic quality of care," Geithner said.

On revamping the financial sector, Geithner rejected Republican claims that the government is assuming too much control over Wall Street.

The House passed a bill Friday prohibiting pay and bonus packages that encourage bankers and traders to take risks so big they could bring down the entire economy. Republican opponents of the legislation said the restrictions should apply only to banks that accept government aid. They criticized Democrats for creating government bureaucracies to make decisions better left to the private sector.

"I think that really everybody understands that we cannot have our financial system go back to the practices that brought this economy to the brink of collapse," Geithner said.

Geithner also said that extending unemployment benefits again is something the administration and Congress are going to "look very carefully at as the end of this year approaches."