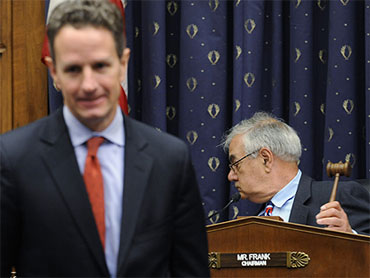 Rep. Barney Frank, a liberal Democrat, has proposed creating the agency but limiting its reach. Under Frank's plan, retailers would escape agency oversight, as would real estate brokers, lawyers, auto dealers and other industries.

Frank's proposal also would not subject companies to a requirement that they offer standardized financial products known as a "plain vanilla" option.

In congressional testimony, Geithner said the administration was supportive of the changes and called them "a pragmatic helpful way to make sure you have the choice for protection."

"There are lots of different ways to make sure that you don't create too much unbridled authority that would be damaging to what's an important part of our financial system," Geithner said.

Geithner's appearance before the House Financial Services Committee comes as the administration tries to reclaim debate on financial reform.

Lawmakers remain divided on how to prevent another financial crisis, with Republicans decrying Democratic proposals as dangerous. Meanwhile, Democrats are debating among themselves how to clamp down on big financial firms without hurting smaller community banks.

Democrats have said they want to pass by the end of the year legislation reforming financial regulations. But they have acknowledged the effort could slip into next year.

Frank promised his plan would give the government the power it needs to prevent future government bailouts by being able to dismantle large financial institutions, even if they aren't banks. Last year, the government was powerless to unwind insurance giant AIG, for example, even though its failure threatened the economy; instead, the government responded with more than $180 billion in rescue funds.

"There is no one magic bullet that does away with 'too big to fail' but you'll have the ability to resolve them in ways that protects taxpayers and gives people a disincentive to get into that situation," Frank said.