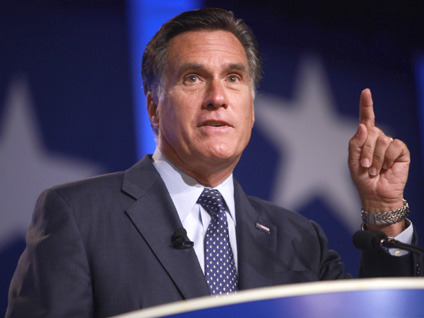 When asked about potential 2012 candidates in an interview that aired on CNN's "Larry King Live" on Monday night, Mr. Bush said he would back his son Jeb Bush, the former governor of Florida, but the younger Bush is not interested in running.

"If you asked me who will the nominee be, I couldn't tell you," Mr. Bush told Larry King. "We like Mitt Romney. We know him well and like him very much."

Mr. Bush said he did not want to "kill him off" by suggesting Romney is a moderate candidate, but he said Romney is a "a reasonable guy, conservative fella, which is good. But I think he'd be a good president, a very good president."

The former president added he and his wife Barbara Bush have yet to meet other potential candidates, such as Minnesota Gov. Tim Pawlenty.

Barbara Bush added that she thought Louisiana Gov. Bobby Jindal or Mississippi Gov. Haley Barbour could make good candidates. Pundits have speculated over the possible presidential ambitions of both Barbour and Jindal.

Mrs. Bush added, "I like a lot of them, but I like people who feel you can respect other people's ideas."

In a segment of the interview that was released earlier, Mrs. Bush said that possible presidential contender Sarah Palin seems "very happy in Alaska." She added, "I hope she'll stay there."

A recent Quinnipiac poll showed that, out of a handful of potential 2012 GOP candidates, Romney fares the best against President Obama in a hypothetical match-up.