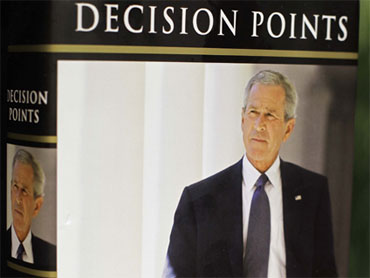 George W. Bush knows that history will shape his legacy more than anything he can say. But that's not gonna stop a guy from trying.

After two years of near silence, Bush is back.

With his new memoir, "Decision Points," and a promotion tour, the president who in cockier times could not think of a single mistake he had made, lists many. He counts the years without a post-9/11 attack as his transcendent achievement. He says the economic calamity he handed off to Barack Obama was "one ugly way to end a presidency."

While he's been absent from the national scene, Bush's team has been busy. Some of the most polarizing figures from his 2001-2009 presidency have found second lives in the political world.

Karl Rove, the operative who might as well have put "mastermind" on his business card, became a master money-raiser for the midterm elections in plenty of time to make Democrats apoplectic all over again. Dick Cheney, the Bush vice president whose influence rivaled if not surpassed Rove's, has tormented the Obama administration at many turns.

He has given the occasional innocuous speech, has tended his presidential center, has helped with Haiti earthquake relief and has offered glimpses of a life that has him walking Barney the dog in his Dallas neighborhood with a poop bag, "picking up that which I had been dodging for the past eight years."

"Decision Points" puts Bush back in the public eye. He'll be all over TV this week and beyond, from news and opinion shows to Oprah Winfrey and Jay Leno.

But times have changed.

Hard-driving tea party adherents, a post-Bush movement, helped to power a Republican takeover of the House and gains in the Senate in the recent elections, seemingly light years from the "compassionate conservatism" that Bush said he hoped to bring to the White House from Texas a decade ago.

For all the sour struggles of his time in Washington and the divisiveness over war policy, Bush pushed Congress to spend billions more on education and ushered in prescription drug coverage for seniors in a major expansion of health care, now overshadowed by Obama's overhaul. Those measures, too, are out of step with the Republican majority coming in.

And he's not out to trash Obama in his new book. The Democrat, in his 2008 presidential campaign, spared no effort to criticize Bush for taking the U.S. to war in Iraq, for letting the effort in Afghanistan flag and for presiding over an economy sinking into the Great Recession.

Instead he details difficult times with Cheney, still his friend, delivering some of the buzz-generating palace intrigue that is expected of any political memoir. Expect still more with memoirs coming out in January by Bush's first defense secretary, Donald H., Rumsfeld, and by Cheney himself in the spring.

Bush was unpopular when he left office and he still is, according to an Associated Press-GfK poll in September. In the survey, 55 percent looked at him unfavorably and 51 percent blamed him for the economic crisis that began on his watch.

He says he won't be around to hear history's ultimate verdict and he's fine with that. But he offers this to the jury: "Commentators who once denounced President Reagan as a dunce and a warmonger talk about how the Great Communicator had won the Cold War."

Bush's mistakes? In his view now, they range from a badly named piece of legislation (the Patriot Act, implying those who opposed it were unpatriotic) to the momentously consequential claim that Iraq had weapons of mass destruction (a justification for war) when none was found.

He writes that he cut troop levels in Iraq too quickly. And that he misjudged the severity of the economic downturn in his final months as president, believing the U.S. might still avoid a recession even as "the house of cards was about to come tumbling down."

"The decider," as he called himself in the White House, says the fallout over the government's response to Hurricane Katrina "cast a cloud" over his second term.

"The problem was not that I made the wrong decisions," he argues. "It was that I took too long to decide." He says he should have acted sooner to order an evacuation and send troops, and did not show adequate empathy for victims.

His regrets, in a lighter vein, extend to a scene in Baghdad in December 2008 when an Iraqi journalist threw his shoes at the president and called him a dog.

"The guy had a pretty live arm" Bush says. "I wish I had caught the damn thing."