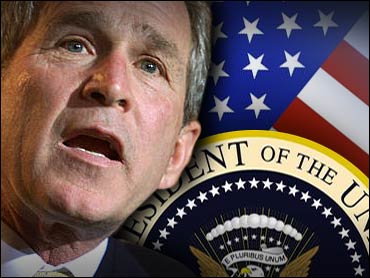 President Bush is often compared to Ronald Reagan and George Bush the Elder. In his latest Against the Grain commentary, CBSNews.com's Dick Meyer says think Nixon.

Fall guys, intimidation and leaked personal attacks on enemies are back in at the 1600 Pennsylvania Avenue. How Nixonian. How disappointing.

Wilson wrote an op-ed piece in "The New York Times" on July 6 that infuriated the White House. Wilson reported that in 2002, at the CIA's request, he had investigated reports that Iraq was trying to buy uranium from Niger and that he had found the reports baseless. From that firsthand experience, Wilson wrote about the case for war in Iraq, "that some of the intelligence related to Iraq's nuclear weapons program was twisted to exaggerate the Iraqi threat."

Wilson's piece ignited a full-blown frenzy and led to an embarrassing White House admission that it shouldn't have included the discredited claim about "yellowcake" from Niger in his State of the Union address. The Texans didn't 'ppreciate that.

Eight days after Wilson published his piece, veteran reporter Robert Novak wrote a column that said, "Wilson never worked for the CIA, but his wife, Valerie Plame, is an Agency operative on weapons of mass destruction. Two senior administration officials told me Wilson's wife suggested sending him to Niger to investigate [the reports]."

Wilson's wife, it has been reported elsewhere, worked undercover. The "two senior officials" who blew her cover to Novak probably did something illegal. They certainly did something vile. Chuck Colson, the keeper of Nixon's enemies list, would be so proud.

Wilson told Newsday, "This might be seen as a smear on me and my reputation, but what it really is is an attempt to keep anybody else from coming forward."

Kofman filed a story that reported on morale problems of troops with the Third Infantry long stationed in Iraq. He had a quote from a soldier who said, "If Donald Rumsfeld was here, I'd ask him for his resignation." The Texans didn't 'ppreciate that.

After the piece ran, Matt Drudge says he got a call from a White House aide who anonymously leaked the inflammatory secret that Kofman is (young readers, please do not continue)…Canadian. A Canuck, reporting on our boys? I never...

Oh yeah, the leaker also disclosed that Kofman is gay. It so happens that Kofman is very openly gay. (For the record, he used to work at CBS News, but I don't believe I ever met or talked to him.)

The Drudge Report ran a headline about Kofman's connection to the dreaded C-word. It also linked to a profile of him in "The Advocate," a gay magazine. Chuck Colson would be so proud.

So far, the Bush Team hasn't had as much luck with fall guys. CIA chief George Tenet tried to take the bullet for the "yellowcake" flap, but the flap flapped on. So NSC aide Stephen Hadley was sent out to take it on the chin. Neither resigned, neither was fired. They just took responsibility.

That is something the President has not done.

Last week, a reader who often sends me very smart e-mails with his own political analysis, wrote that he had just had a "Eureka" epiphany about the GWB-RMN axis. I dismissed it. I think George Bush is much more like Ronald Reagan: supremely self-confident, simplistic, sincere, comfortable in his skin and thus comforting, un-neurotic, lacking all traces of self-doubt, incurious, nice manners. Nixon had none of those qualities.

But the Bush White House is becoming Nixon-like, with a smile and, of course, good manners. It's re-election time and it's CREEP-Y.