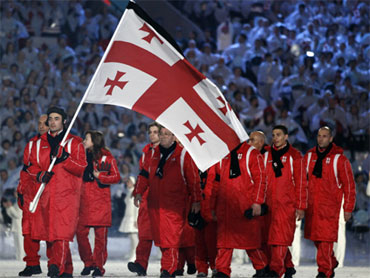 (CBS)
As the Vancouver Olympics draw to a close, the Georgian Olympic Team is looking ahead to the 2014 Games in the Russian city of Sochi -- and using them as to make a political point.

Sochi is "just 20 miles from the border of Abkhazia, a region of Georgia occupied and ethnically cleansed by Russian troops after Moscow invaded our country in 2008," the team said in a statement.

"Today, about 5,000 Russian soldiers remain in Abkhazia in violation of a ceasefire agreement signed by Russia and Georgia and brokered by French President Nicolas Sarkozy," the team said. "More than 350,000 Georgian citizens have been forced to flee their homes…Many of their houses have been destroyed or taken, and their businesses and lands have been expropriated."

"As we leave Vancouver and look ahead to the 2014 games, we hope that the world will not forget that just a few miles from Sochi, Russian troops have invaded a sovereign country and brutally seized and occupied an entire region that is not theirs," the statement continues. "…We ask our fellow athletes, and people who believe in freedom everywhere, to join us in demanding that Russia end its occupation of Georgia, that it stop exploiting the people and resources of Abkhazia's fragile Black Sea coastal zone for construction of Olympic facilities in Sochi, and that it allow Georgia's internally displaced people to return to their homes. The Olympic Games should not be built on a foundation of violence and ecological disaster."

Russia deployed troops in the separatist regions of South Ossetia and Abkhazia in 2008, arguing that they had to be protected from Georgian aggression.

Russia has been unhappy with its relatively weak performance at the Vancouver games, and President Dmitry Medvedev is asking athletic officials to step down as a result.

Nodar Kumaritashvili, the Luge athlete killed in a training run before the Games, was a member of the Georgian Olympic team.