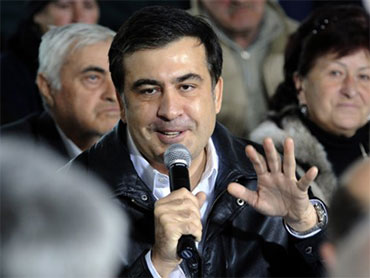 Georgia's opposition politicians on Monday denounced the government over a hoax television broadcast that said Russia had invaded and the president had been killed.

The broadcast Saturday, which simulated a news program, sparked wide anxiety in Georgia, which is still traumatized by the August 2008 war in which Russian troops advanced deep into the country.

Cellular phone networks briefly went down as panicked Georgians phoned each other. The show was identified as fictional only at its beginning - which many viewers apparently missed - and its end 30 minutes later.

Imedi, the station that aired the show, is private, but its director is a former chief of staff for President Mikhail Saakashvili. Opponents characterized the broadcast as government propaganda, aimed at discrediting them.

The main opposition, the Democratic Movement for a United Georgia, said in a statement that "the leadership of Georgia has shown its goal of preserving its power by creating a virtual reality in the country through information terror."

The movement is led by Nino Burdzhanadze, a former Saakashvili ally who led last year's extended protests aimed at forcing him to resign. The hoax report included the claim that Burdzhanadze welcomed the Russian invasion and thanked the troops.

"Saakashvili needs to have a permanent threat from Russia, it's the last argument for his staying in power," another one-time ally, former foreign minister Salome Zurabishvili, was quoted as saying in the newspaper Mteli Kvira.

Russian Foreign Ministry spokesman Andrei Nesterenko on Monday called the broadcast "irresponsible and amoral ... (it) brought concrete damage to security and stability in the region, substantially raising the degree of tension."

He also criticized Saakashvili for his "approving attitude" to the broadcast.

The 2008 war began with a withering Georgian barrage of the capital of a Russian-backed Georgian separatist region. Saakashvili and his government insist the assault was launched in response to Russian troops invading the territory.

A European Union-sponsored report last year said Georgia's attack was unjustifiable under international law, but also noted Russia had taunted and provoked Georgia for years over the territory.

Georgians initially rallied behind Saakashvili during and after the war - or at least refrained from criticizing him - but dismay with his impetuous ways grew into weeks of protests last year.