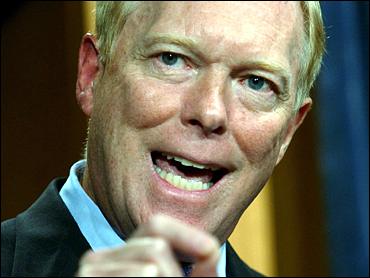 Democratic presidential candidate Dick Gephardt on Wednesday detailed his plan to give all Americans access to health insurance, the centerpiece of his presidential campaign and what he called the "moral issue of our time."

Gephardt said the first bill he would send to Congress as president would require every company to provide health insurance for its employees, with 60 percent of the cost paid by a refundable tax credit. The bill also would repeal Bush's tax cuts to pay the more than $200 billion annual cost to the federal government.

Currently, employers can get tax deductions that cover about 30 percent of their health care costs. Gephardt said by doubling the government's share of the cost, companies would have more money to invest and could increase wages, providing a jump-start to the economy.

"This is the right way to stimulate the economy — not knee-jerk tax cuts that do nothing but pay off George Bush's wealthy campaign contributors while killing economic growth," the Missouri congressman said in a speech to the Service Employees International Union, which represents 1.5 million health care workers.

Workers still would have to pay their portion of premiums to help cover health care costs, but companies that increased employee contributions would not qualify for the tax credit. Gephardt would subsidize the employee contribution for workers below or near the poverty line.

Gephardt also wants to subsidize two-thirds of the cost of COBRA health insurance for unemployed workers and expand the State Children's Health Insurance Program for uninsured low income children to their parents.

The law created a new 10 percent rate for the first $6,000 of each person's income and reduced the top 39.6 percent rate to 35 percent. Most other rates dropped by 3 percentage points.

Gephardt challenged Bush and his rivals for the Democratic presidential nomination to come up with a health care plan that provides access to coverage for the 41 million uninsured Americans, stimulates the economy and creates jobs. Gephardt is the first presidential candidate to detail his health care plan, but several of his rivals in the nine-way Democratic primary race plan to unveil their ideas to expand coverage in coming weeks.

"Access to quality health care is the moral issue of our time," Gephardt said. "And claiming the moral high ground while others go untreated is something that only God can sort out."

Gephardt used much of his speech to assail Bush's economic and domestic record. He described Bush as indifferent to the needs of people across the country trying to make ends meet.

"The truth is, this is not just George Bush's failed economy, it's also George Bush's health care crisis in the crowded emergency rooms of this country, filled with families who can get health care nowhere else," he said. "How can he sleep?"