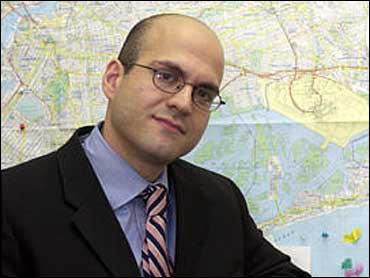 Public health officials have developed an odd interest lately in the mundane and arcane.

Epidemiologists are tracking orange juice sales at the local Safeway and poring over school attendance data. They're mapping every case of the sniffles they can find and watching surveillance videos to count how many times people sneeze.

The idea is that a sudden spike in everyday aches, pains, sniffles and coughs could signal the earliest stages of a health commissioner's worst nightmare - a massive biological attack. So in the last few years, an increasing number of health departments have started collecting electronic data from hospital emergency rooms, pharmacies and other sources in an effort to gauge the overall level of illness in the population.

Epidemiologists call their new strategy syndromic surveillance, because it looks for increases in clusters of symptoms - "syndromes" in medical jargon - rather than particular disease diagnoses. In September, public health officials from around the country met at the New York Academy of Medicine to explore the potential of using syndromic surveillance as part of a bioterror alarm system. The conference was organized by the New York City health department with help from the Centers for Disease Control and funding from the Sloan Foundation.

The new disease-tracking approach is also on the agenda at the American Public Health Association annual meeting in Philadelphia Nov. 9-13.

"Do not under any circumstances be surprised when the next shoe drops," Osterholm admonished. "It will drop."

And more than a year after the Sept. 11 attacks, the nation remains woefully vulnerable to terrorist attacks of all kinds, a panel on homeland security reported recently.

If it were to provide early warning of a bioterror attack, syndromic surveillance might avert massive casualties. Even some of the deadliest bioterror agents - including anthrax, plague and smallpox - can be treated successfully if they are diagnosed early enough. But they also progress quickly from mild symptoms to serious illness to death, so hours count.

"There is the potential of a huge benefit if we really do get early detection of a large bioterror event out of this," said Farzad Mostashari, an assistant commissioner at the New York City health department.

"We don't pretend that the technology can replace man or that this is the answer to everything," said Mostashari.

But doctors may not recognize such rare diseases as tularemia, Q fever or bubonic plague - all potential bioterror agents. And one diagnosis would not tell public health officials very much about the scope, geographic location or timing of an attack. So to supplement the eyes and ears of individual physicians, some public health departments now monitor everything from emergency room visits, 911 calls and doctor visits to school absenteeism and sales of cough syrup.

Public health has enjoyed a badly needed cash infusion in the year since the World Trade Center and anthrax attacks. The Centers for Disease Control and Prevention got $1.1 billion from Congress this year to beef up bioterrorism defense. It is hard to say exactly how much of that money is going to surveillance, but many experts believe spending a sizable chunk of it on warning systems would be a good idea.

"For a long time it was very hard to get people to listen when you talked about public health surveillance," said Margaret Hamburg, vice president for biological programs at the Nuclear Threat Initiative, a Washington, D.C., think tank. "Surveillance simply was not sexy and it was very poorly understood."

Until recently, some researchers were skeptical that anything so apparently trivial as cough syrup sales could indicate a significant jump in illness. But researchers have shown that at least with the annual flu season, there are a wealth of indicators that people are getting sick.

Elaine Newton, a graduate student at Carnegie Mellon University, has done studies showing that orange juice and paper tissue sales increase at the onset of flu season. She has also found that Internet consumer health web sites dealing with the flu get more hits a few days before a flu outbreak is officially announced.

Now Newton is exploring the seemingly far-fetched idea of using surveillance camera footage of public places to gauge the health of the population, perhaps even by counting coughs and sneezes.

Such notions naturally raise the issue of privacy. The current systems do not collect names or other identifying information, but Carnegie Mellon computer scientist Latanya Sweeney said anybody who really wanted to identify a person would probably be able to do so by combining data from the bioterror system with facts culled from voter rolls or some other public database.

New York has had a system since 1999. It analyzes information from hospital emergency rooms, the 911 system and ambulance dispatches for sudden increases. The system also collects sales data from city drugstores and absentee statistics from employers and schools as supplementary information.

Since June 2001, Seattle's public health department has analyzed reports from three emergency rooms and 11 primary care clinics. The Seattle system also monitors 911 dispatches, which are available via the Internet by the city's fire department.

Baltimore even collects information on dog and cat deaths from the city's animal control department, and keeps track of school absenteeism and over-the-counter cold medicine sales.

A system in western Pennsylvania collects information on every patient who passes through the doors of 21 hospital emergency departments. It records the age, gender, home ZIP code, time of admission and chief complaint of each patient, and looks for sudden increases in respiratory illness and other symptoms that might indicate a bioterror attack. A version of the Pennsylvania system was also set up in Utah for the 2002 Winter Olympics, and has been operating there ever since.

Monitoring major public events for bioterrorism has become a challenging subspecialty for designers of these early warning systems. In addition to the 2002 Winter Olympics, systems have been set up for the 1999 World Trade Organization meeting in Seattle, both the Democratic and Republican party conventions in 2000 and the 2001 World Series.

In October the Centers for Disease Control and Prevention awarded a $1.2 million grant to Harvard University researchers to begin developing a national warning system that automatically collects information on the number of patients with flu-like symptoms, strange rashes and other possible symptoms of bioterrorism.

The New York health department knows its surveillance system works because it goes off all the time. A sudden increase in rashes at a particularly busy emergency room is much more likely to be a random uptick than a smallpox attack. A rise in fevers and coughs during November almost certainly means "flu," not "anthrax."

For example, New York's system issued an alert the day American Airlines Flight 587 crashed on takeoff from JFK airport, two months after the World Trade Center attacks. The two hospitals nearest to the crash site were reporting an unusually high number of patients with respiratory problems, a possible indicator of an attack with anthrax or several other bioterror agents.

When investigators checked with the hospitals, they discovered that the increase was due to a handful of factors, some related to the plane crash and some incidental. There was one firefighter who had smoke inhalation from responding to the crash, two cases of flu, three asthma attacks, two people complaining of chest pain and one person who appeared upon examination to be having an anxiety attack.

"We didn't really think there was a bioterrorism attack," said Mostashari, who is credited with setting up the New York surveillance system.

Even so, he added, every suspicious pattern has to be investigated or the system won't work.

"We do need something to give us a sense of the pulse of the city," said Marcelle Layton, an assistant commissioner at the New York Department of Health and Mental Hygiene.

For all its sensitivity, New York's system did not detect the anthrax attacks last fall. Layton and her colleagues do not consider that a problem, however, because the system is designed to detect major airborne bioterror attacks. Last year's mail attacks were so limited that only one of the seven New Yorkers who contracted skin anthrax from contaminated letters even visited an emergency room.