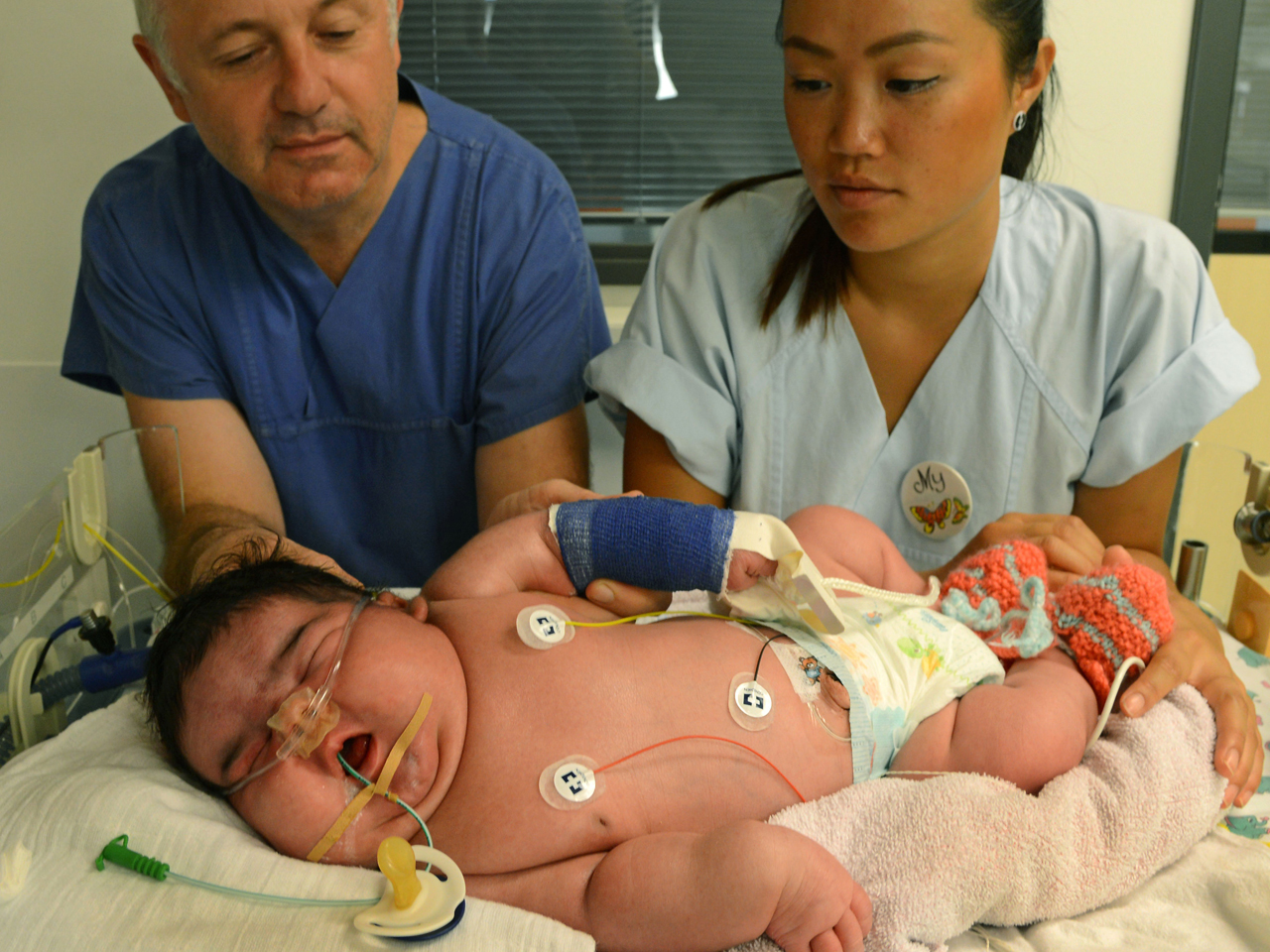 A new baby girl has tipped the scales in Germany and may have entered herself into the record books.

An image released by the Associated Press (above) shows baby Jasleen, who came into this world on July 25 weighing roughly 13.47 pounds (6,110 grams) and 22.5 inches (57.5 centimeters) long. She was pictured in the intensive care ward of the University Hospital in Lepzig, Germany.

Baby Jasleen is considered to have macrosomia, a definition for being born in the top tenth percentile in weight of all babies.

Typically, that's a baby more than 8 pounds, 13 ounces, according to the Mayo Clinic.

The clinic adds that fetal macrosomia makes a vaginal delivery difficult and could injury the baby during birth. These children are often delivered through cesarean procedures.

However, this baby was born naturally, according to her doctors.

"A particularly heavy baby was born yesterday at the University Clinic in Leipzig," the hospital said in a July 26 statement translated for CBSNews.com. Her weight made her "the heaviest German child to have been delivered naturally," according to the statement.

Professor Holger Stepan, director of obstetrics at the University Hospital Leipzig, said in the statement that doctors thought the baby was going to be big, so they put together a medical team of additional pediatricians, surgeons and midwives to be prepared for any possible complications. An anesthesiologist and caesarian specialist were also on standby, and were not needed.

"I have never delivered such a large baby," said Stepan.

"We nonetheless decided to pursue a natural birth because with the weight of the mother and the size of the child a cesarean would have also been very risky," said Stepan.

Macrosomia can carry health risks for the child, including a risk for higher-than-normal blood sugar, childhood obesity and metabolic syndrome, which is a collection of risk factors that together raise risk for diabetes and heart disease.

But, it's not easy for doctors to spot prior to the birth.

"Ultrasound is not 100 percent," Dr. Jennifer Wu, OB/GYN at Lenox Hill Hospital in New York City, previously told CBSNews.com. "It's about 10 percent off, and it actually is more off if the baby is extremely small or extremely large."

Stepan added in the statement the ultrasound did not accurately gauge the baby's weight, and the actual size and weight of the child "astonished us."

Mothers who deliver a baby with macrosomia also have a higher risk of lacerations, labor problems and bleeding after labor or a rupture of the uterus in some cases.

The mother is doing well, and the baby is being cared for in the hospital's neonatal intensive care unit.

Big babies often make big news. InJuly, Addyson Gale Cessna was born at 13 pounds, 12 ounces at Armstrong County Memorial Hospital in Kittanning, Pa., which her doctors at the time believed to be a local record. She was born by a C-section.

In March an even bigger baby inBritain, George King,came into this world at a whopping 15 pounds, 7 ounces.

And who can forget Texas baby JaMichael Brown, nicknamed "Moose," who was born in July 2011 at an impressive 16 pounds, 1 ounce.