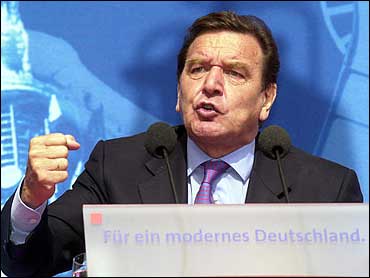 Premier Silvio Berlusconi said Wednesday he was "sorry" for Chancellor Gerhard Schroeder after the German leader canceled his Italian vacation to protest comments by an Italian official that Germans were "hyper-nationalist" arrogant blondes.

Berlusconi was asked to comment on Schroeder's decision during a visit to Positano, on the Amalfi coast, and responded: "I'm sorry for him," according to the ANSA news agency.

Earlier, Foreign Minister Franco Frattini had said he was sorry that Schroeder wouldn't be taking his planned holiday in the Adriatic resort of Pesaro and stressed that the incident shouldn't have any broader political implications.

The flap was beginning to have political implications in Italy, with the opposition Ulivo coalition saying it would formally ask for the removal of Industry Ministry undersecretary Stefano Stefani in a motion Thursday in parliament.

Stefani had called Germany a "country intoxicated with arrogant certainties," and Germans "stereotyped blondes with a hyper-nationalist pride" in an article in La Padania, the newspaper of the anti-immigrant, occasionally xenophobic Northern League party.

He wrote the piece after the first Italian-German flap played out in the European Parliament last week. In that gaffe, Berlusconi likened German lawmaker Martin Schulz to a Nazi prison guard after Schulz questioned the premier about laws that have eased his legal problems.

On Wednesday, Berlin announced that Schroeder had canceled his planned Pesaro vacation as a result. Schroeder decided the spat would make it hard for his family to have a restful and quiet vacation together in Italy and decided to stay home in Hanover, Schroeder's spokesman Bela Anda said in a statement.

Luciano Violante, head of the opposition Democrats of the Left in the Italian parliament's lower chamber, echoed concerns by many Italian officials that the storm could have serious implications on Italy's tourism industry, which relies heavily on big-spending German visitors.

Last year, more than 9.2 million Germans visited Italy, amounting to about 25 percent of all foreign visitors to the country, according to statistics from the Italian tourism department. The agency estimated the economic impact of German visitors in Italy at $10.7 billion.

"The economic damage that is being caused is enormous," Violante said at a press conference announcing that Ulivo would seek Stefani's dismissal.

The province of Pesaro said Wednesday it was considering seeking damages both from Stefani and from the Italian government for lost revenue, saying Stefani's comments had cast a terrible image of Italy in Germany but that the government hadn't done anything to punish him.

"You can't have a man with government responsibilities using such language against a friendly premier and people," ANSA quoted the provincial president, Palmiro Ucchielli, as saying.

Italy and Germany have had more substantive spats this year, especially over the war in Iraq. Berlusconi was a vocal supporter the U.S.-led war, while Schroeder angered President Bush by opposing any military action — a move seen as intended to curry favor with the dovish German electorate.

The Nazi remark was not the first time Berlusconi's sharp tongue raised hackles in Europe. He has said that communists eat babies and implied that Finns had little appreciation of good food.