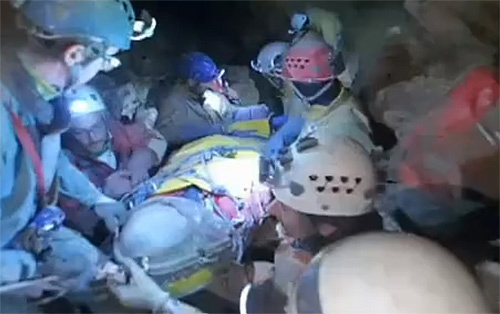 BERLIN -- An injured German cave researcher was brought out of the country's deepest cavern on Thursday at the end of a spectacular rescue operation that lasted nearly a week.

Johann Westhauser sustained head injuries in a rock fall June 8 while nearly 3,280 feet underground in the Riesending cave system, in the Alps near the Austrian border. Rescue teams embarked Friday on the arduous task of hauling him up through the labyrinth of narrow passages and precipitous vertical shafts.

A fit expert could scale the distance from the site of the accident to the entrance in about 12 hours, but rescuers had to haul Westhauser on a stretcher through the challenging terrain. The entrance to the cave is on a mountainside, some 5,900 feet above sea level.

Westhauser, whose condition has been described as stable, was being treated by medical experts outside the cave.