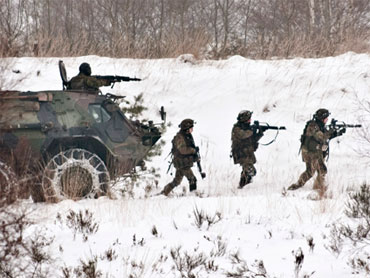 Germany plans to increase its troop contingent in Afghanistan by up to 850 and focus more strongly on training local security forces, Chancellor Angela Merkel said Tuesday.

Berlin plans to send 500 extra troops to Afghanistan. It also expects to adjust the parliamentary mandate under which they serve to allow for another 350 soldiers to be deployed as a "flexible reserve," to help with events such as elections if necessary, Merkel said.

She gave the figures after meeting with ministers to thrash out Germany's position for this week's London conference on the future of Afghanistan.

Germany currently has nearly 4,300 soldiers in northern Afghanistan. They serve under a parliamentary mandate that sets the maximum number at 4,500; Merkel did not specify what the new upper limit might be.

"We will set up training and protection battalions that will ensure that, by the end of 2011, the necessary training of Afghan soldiers can be achieved," the chancellor told reporters.

The number of soldiers involved in training Afghan forces will be increased from 1,400 from 280 at present, she said.

The move is being coordinated with Scandinavian countries also stationed in the north, which also will set up a training battalion, Merkel added.

Separately, the number of German police offers on the ground training their Afghan counterparts will rise to 200 from 123.

The troop deployment is unpopular at home, and Merkel concentrated heavily on civilian reconstruction as she outlined Germany's "overall package" for Afghanistan.

She said that "it opens a new stage - a stage of responsibly handing over to the Afghan government."

Merkel said Berlin is not setting a withdrawal date for its troops.

"We want to start reducing our own contingent in 2011 and we want to accomplish the handover of security responsibilities to Afghanistan in 2014," he said.

Germany will nearly double its civilian reconstruction aid starting this year, Merkel said. It is set to increase from 220 million ($311 million) per year so far to 430 million, and be targeted at improving roads, water and power supplies, education and employment opportunities in northern Afghanistan.

She put the fund's total value at $500 million, or 350, over five years, and said Germany would contribute 50 million of that.

The northern region where German troops are stationed has long been relatively calm, but there has been increasing violence over the past year in the Kunduz area.

Afghan President Hamid Karzai was due in Berlin Tuesday evening to meet Merkel ahead of the London conference, which takes place on Thursday. Westerwelle will represent Germany in London.