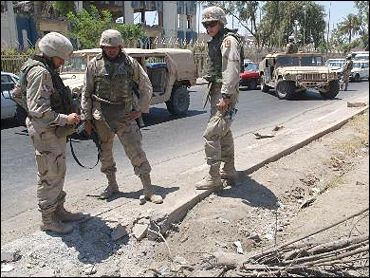 A U.S. soldier was killed and two were wounded by small-arms fire at their base in northern Iraq.

The U.S. Central Command said the soldiers from the 4th Infantry Division came under attack at a forward position 50 miles northeast of Baghdad at 11:45 p.m. Wednesday.

The wounded soldiers, who weren't identified until their families were notified, were taken to a military hospital for treatment.

The death brought to 50 the number of U.S. troops killed in hostile action since May 1, when President Bush declared an end to major combat in Iraq. In all, 165 Americans have been killed in combat in Iraq, 18 more than died in the 1991 Gulf War.

The attack came 25 miles east of Baqouba, where U.S. troops have come under repeated attack recently, especially by mortar fire.

In Baghdad, Iraqis witnesses reported another attack on two U.S. trucks carrying unexploded ordnance to Baghdad International Airport for destruction. The witnesses said a rocket-propelled grenade was fired on one truck and the ordnance exploded. A U.S. armored vehicle could be seen burning on the road.

Witness Ali Khamid said he saw two U.S. soldiers taken away by helicopter and two others, faces covered as if dead, loaded into an ambulance. The military said it had no information on the incident.