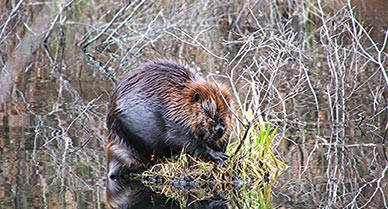 I'll forgo the temptation to joke about busy beavers but the news wires have been buzzing with word of the discovery of the world's biggest beaver dam, a 2,790 foot long piece of handicraft somewhere in the forests of Northern Alberta's Wood Buffalo National Park.

The researcher credited with making the discovery, Jean Thie, said he found the dam using satellite imagery and the Google Earth application. But that was back in 2008 So why is everyone making a fuss over the story just now?

Maybe we just like reading about beavers. Whatever the reason, this is getting a lot more recognition for his discovery than he did on the first go-around. Besides, it's a fun story. In an interview with Canada's CBC News, he also held out the possibility that Alberta, with its rich beaver habitat, may even contain a longer dam than the one he originally came across.

For now, the next time somebody asks you where is the world's largest beaver dam, you know the answer.