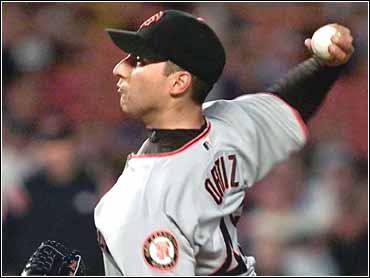 Russ Ortiz and Barry Bonds made sure the San Francisco Giants escaped Shea Stadium with at least one victory.

Ortiz shut out the Mets on one single for seven innings, Bonds had a season-high four hits and the Giants averted a four-game sweep Monday night with an 11-1 romp over New York.

Bonds, held to a mere single in 11 at-bats in the opening three games of the series, went 4-for-4. His luck, and the Giants' fortunes, seemed to change as soon as he lined a single in his first at-bat.

"I got to first base and told Todd (Mets first baseman Zeile) that I was bound to get a hit sooner or later," Bonds said.

The NL West leaders stopped the Mets' five-game winning streak. The Giants even had fans at Shea where New York had won 12 of 13

booing the home team in the late innings.

"It may not sound like much, but it's nice to get out of here without getting swept," Giants manager Dusty Baker said.

Ortiz (8-10) held the Mets hitless until Mike Bordick's leadoff single in the sixth. The right-hander won his third straight start and extended his scoreless streak to 19 innings.

"I can't control what happened before in the other games," he said. "I didn't feel any extra pressure to win."

Ortiz worked around six walks, twice getting Mike Piazza to ground into double plays, and improved to 4-0 lifetime against New York.

Limited to one earned run in 32 innings in the series, the Giants broke loose for five runs in the sixth against Rck Reed (7-3) and added six more in the seventh off Dennis Cook.

Bonds singled to set up both big innings, while Ortiz capped San Francisco's scoring with a two-run single.

Aaron Fultz relieved Ortiz to start the eighth and served up a home run to Jay Payton on his second pitch. Robb Nen pitched the ninth to complete the two-hitter.

Reed, with just one loss in his previous 14 starts, blanked the Giants on three singles for five innings.

But after singles by Bill Mueller and Bonds to start the sixth, Reed one of the majors' best control pitchers made his biggest mistake when he hit Jeff Kent with a 1-2 pitch to load the bases with no outs.

"It was one of those games where they did everything right and we didn't do anything right," Reed said.

The Giants again loaded the bases with no outs in the seventh on two walks and Bonds' single. Snow blooped a two-run single over the drawn-in infield, Burks doubled home a run and Aurilia singled home another.

Ortiz, with only two RBIs all season, hit a two-run single that finished Cook.

The two big bursts ended any hopes the Mets had of completing their first four-game sweep of the Giants since 1990. In May, the Giants swept a four-game set from New York in San Francisco.

"You'd rather win them all, but sometimes you can't," Mets manager Bobby Valentine said.