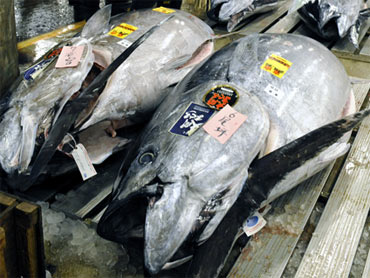 A giant bluefin tuna fetched $177,000 in an auction Tuesday at the world's largest wholesale fish market in Japan.

The gargantuan tuna was bought and shared by the owners of a Japanese sushi restaurant and a Hong Kong-based sushi bar, said a market representative on condition of anonymity because he was not authorized to disclose the information.

Caught off the coast of northern Japan, the big tuna was among 570 put up for auction Tuesday. About 40 percent of the auctioned tuna came from abroad, including from Indonesia and Mexico, the representative said.

Japan is the world's biggest consumer of seafood with Japanese eating 80 percent of the Atlantic and Pacific bluefins caught. The two tuna species are the most sought after by sushi-lovers.

However, tuna consumption in Japan has declined because of a prolonged economic slump as the world's second-largest economy struggles to shake off its worst recession since World War II.

"Consumers are shying away from eating tuna. ... We are very worried about the trend," the market representative said.

Apart from falling demand for tuna, wholesalers are worried about growing calls for tighter fishing rules amid declining tuna stocks.

The International Commission for the Conservation of Atlantic Tunas in November slashed the quota for the 2010 catch by about one-third to 13,500 tons -- a move criticized by environmentalists as not going far enough.