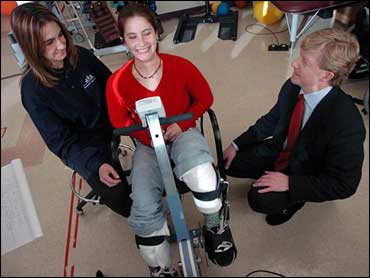 It couldn't have been a better debut for Calgary goaltender Jean-Sebastien Giguere.

made 39 saves Sunday night to lead the Flames to a 3-1 victory over the Colorado Avalanche and Patrick Roy -- his goaltending idol.

"Every Quebec goalie tries to pattern himself after him," said Giguere, whose only other taste of the NHL came two seasons ago when he appeared in eight games with the Hartford Whalers.

"You grow up watching him ... he's one of the best goalies in the NHL and there's no reason why you wouldn't look up to him and try to do things the same way as he does."

After goals by Theoren Fleury and Jeff Shantz gave Calgary a 2-1 lead in the game's 13th minute, Giguere took over. He was at his best in the second period when the Avalanche outshot Calgary 20-3 but failed to score.

"He was incredible," said Joe Sakic, who was robbed from close range. "He's a big guy who covers a lot of the net. He looked a lot like a young Patrick Roy out there."

Giguere was recalled from Saint John of the American Hockey League on Friday when Calgary starter Ken Wregget went out with a strained back. In the AHL, Giguere was 4-1-2 in seven games and led the league in both goals-against average (1.68) and save percentage (.950).

Jarome Iginla scored into an empty net to round out the scoring for the Flames, who won for the firt time at home this season after an 0-3-2 start.

Chris Drury scored the only goal for the Avalanche, who have yet to record consecutive wins this season.

Giguere had little time to settle in for his Calgary debut, facing Colorado's powerful power play for nearly half of the first period.

Calgary entered the game as the league's most-penalized team and showed why in the first period taking five of six minors called by the referee tandem of Stephen Walkom and Scott Zelnek.

Despite the manpower disadvantage, Calgary held Colorado to one power-play goal and a total of 10 shots in the period. The Avalanche finished the game 1-for-7 on the power play, while Calgary was 0-for-2.

"With the talent we have out there, that's inexcusable," said Sakic on the misfortunes of the power play. "We've got to generate more chances."

Colorado lost defenseman Sylvain Lefebvre three minutes into the second period when a shot from Calgary's Cory Stillman ricocheted off someone's foot and hit him in the face. He did not return.