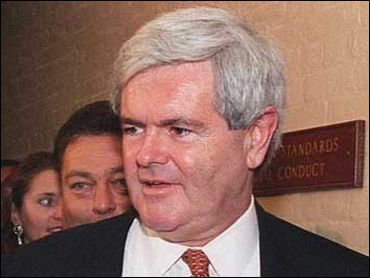 There was fresh criticism Tuesday of embattled House Majority Leader Tom DeLay from a prominent member of his own party.

In an exclusive interview with CBS News Correspondent Gloria Borger, former House Speaker Newt Gingrich said it's time for DeLay to stop blaming a left-wing conspiracy for his ethics controversy and to lay out his case for the American people to judge.

"I don't want to prejudge him and my hope is that Tom will be able to prove his case," said Gingrich, who engineered the Republican takeover of the House in 1994. "But I think the burden is on him to prove it at this point."

Is he doing that? "I don't know yet. I think the jury's out," said Gingrich.

Hoping to hold support among fellow Republicans, DeLay urged GOP senators Tuesday to blame Democrats if asked about his ethics controversy. He also accused the news media of twisting supportive comments so they sounded like criticism.

Officials said DeLay recommended that senators respond to questions by saying Democrats have no agenda other than partisanship, and are attacking him to prevent Republicans from accomplishing their legislative program. One Republican said the Texan referred to a "mammoth operation" funded by Democratic supporters and designed to destroy him as a symbol of the Republican majority.

DeLay also thanked Sen. Rick Santorum, R-Pa., for his recent comments and said the news media had twisted them to make them sound critical, the officials added, all speaking on condition of anonymity.

In an appearance on ABC's "This Week" on Sunday, Santorum said DeLay "has to come forward and lay out what he did and why he did it and let the people then judge for themselves. But from everything I've heard, again, from the comments and responding to those, is everything he's done was according to the law."

DeLay's case is at the heart of a broader controversy in the House, where Democrats accuse Republicans of unilaterally changing ethics committee rules to prevent any further investigation of DeLay. Republicans have denied the allegation.

The panel arranged a meeting for Wednesday, and Rep. Alan Mollohan of West Virginia, the senior Democrat, said he would renew a push for a bipartisan rewrite of the rules that Republicans put into effect in January on a party-line vote. Officials in both parties said they knew of no compromise discussions.

One senior Republican spoke sympathetically of DeLay after the closed-door meeting.

"I hope he survives, and I hope he will stay in there and do his job," said Sen. Trent Lott, R-Miss.

"The power of prayer is the only thing that will sustain you" in the circumstance DeLay is in, Lott added, and he spoke disparagingly of any Republicans who fail to stand by the Texan.

"That's the problem, you know, Republicans eat their own. ... Democrats stand by their own until hell freezes over," said Lott, who was ousted as Senate majority leader two years ago after making controversial race-based comments at a birthday party for the late Strom Thurmond.

DeLay was admonished three times last year by the House ethics committee. Recent articles have disclosed that his wife and daughter were paid approximately $500,000 in recent years by political organizations under his control, and have raised questions about the financing of three overseas trips he took.

DeLay has consistently denied any violation of either law or House rules.

His private remarks to Senate Republicans were in keeping with the response frequently offered on his behalf by House Republicans: Blame the Democrats and occasionally the news media for the scrutiny he faces. House Republicans intend to follow the script later in the week, hoping to showcase passage of bankruptcy legislation and estate tax repeal as a counterpoint to Democratic charges that they are merely power-hungry.

Several Republicans stressed that DeLay's appearance at the senators' lunch was routine, noting that GOP leaders of one house have begun attending meetings of the rank and file of the other house in recent weeks.

His remarks were "very low-key. It wasn't demanding or threatening or pounding the table," Lott said afterward.