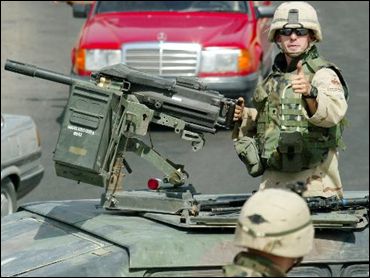 Three Iraqis were killed and seven U.S. soldiers injured Tuesday in attacks throughout Iraq, as a voice attributed to Saddam Hussein called again for more violence.

Witnesses said three Iraqis — including a 13-year-old boy — were killed following a grenade attack on a police station in a Baghdad suburb. Witnesses told Associated Press Television News that those killed when troops returned fire were not among those who attacked the police station.

Insurgents dropped a homemade bomb from a bridge onto a passing U.S. military convoy in Baghdad, while another military vehicle struck a land mine in the capital. Two soldiers were injured in each incident, said Sgt. Patrick Compton.

In Kirkuk, 175 miles north of the capital, assailants fired a rocket-propelled grenade at a military convoy, injuring three servicemen. The patrol returned fire, but there was no word of Iraqi casualties or arrests.

Late Monday, insurgents fired mortars at a base near Balad, 55 miles north of the capital, the military said. U.S. forces subsequently caught 12 of the suspected attackers.

The violence came after a deadly 24-hour period that saw three U.S. troops killed in Baghdad — two in shootings and one in a bomb attack.